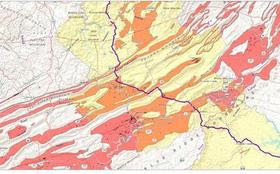 A study of the geology along the proposed Mountain Valley Pipeline route shows it would run through a fragile, karst “no-build zone.” The karst is orange and pink here; the pipeline route is purple. (Kastning)

A big chunk of the proposed path of the Mountain Valley Pipeline is in what ought to be a “no-build zone,” according to a geologic study.

Ernst Kastning, a former professor of geology at Radford University, looked at the karst geology along the path for pipeline opponents. The karst along the West Virginia-Virginia border is made of sandstone that’s eroded into numerous caves and sinkholes. Kastning said it tends to give way, making it risky and problematic to put a huge gas pipeline on that fragile landscape – especially given the steep ridges and valleys and chance of earthquakes.

“Slopes that are high angle and historically have failed, soils that are on the weak side, and then the chance of having a seismic event,” he said. “Any one of those issues in and of itself is important, but when you compound them, then we’re looking at a potential problem.”

Supporters have argued that the Mountain Valley Pipeline is needed to open a bottleneck in getting Marcellus and Utica natural gas to markets in the East. The pipeline would run 300 miles and cost about $3.5 billion.

Kastning’s study found a lot of karst topography in one county in West Virginia and three in Virginia where the MVP would be built. That part of the pipeline’s path is about a third of the way from the eastern end and might be difficult to avoid. He said many of these problems are not unique to the MVP project.

“To date, there are no 42-inch pipelines running across the valley and ridge, the Appalachian mountain range,” he said, “and there are reasons for that. Should the pipeline go in, there are quite a number of hazards to not only the safety of the people but the natural environment.”

The study is being submitted to the Federal Energy Regulatory Commission as it deliberates on the MVP and several other pipeline proposals designed to supply eastern gas markets.

The full study is online at wp.vasierraclub.org.