Home » The Issues » Health Care » Study: The Deadly Toll Of Opting Out Of The New Medicaid Expansion

Study: The Deadly Toll Of Opting Out Of The New Medicaid Expansion 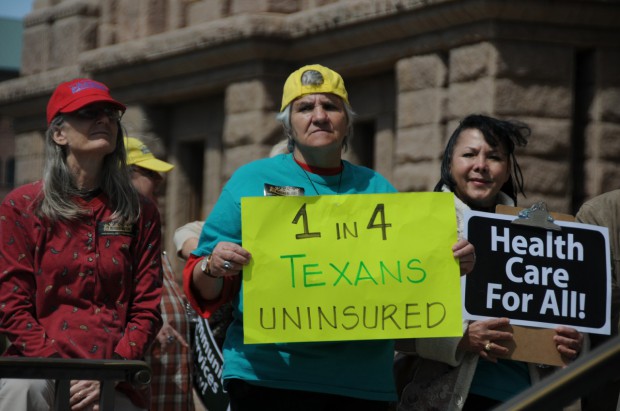 Here are some serious numbers from Harvard researchers regarding the 25 states that have opted out of expanding Medicaid coverage under the Affordable Care Act:

We estimate that due to the opt-outs 7.78 million people who would have gained coverage will remain uninsured. This will result in between 7,115 and 17,104 more deaths than had all states opted-in.

Here’s more from the Cambridge Health Alliance news release (and for full disclosure, all of the study authors are members of the national group, Physicians For a National Health Program, which advocates that the U.S. adopt a Canadian-style single payer health system. PNHP did not pay for any part of this research, according to a spokesperson):

Dickman and his colleagues, longtime health researchers at Harvard Medical School and the City University of New York drew on demographic data from the Census Bureau’s 2013 Current Population Survey and estimates on Medicaid take-up rates from the Congressional Budget Office and elsewhere to characterize those who would remain uninsured in states opting out of Medicaid expansion.

They developed estimates of the health effects of remaining uninsured based on previous studies that used state-level data on Medicaid expansions and death rates, the National Health and Nutrition Examination Survey Mortality Follow-up, and the Oregon Health Insurance Experiment.

In addition to arriving at national estimates, the researchers were able to break the findings down by state.

For example, in Texas, the largest state opting out of the Medicaid expansion, approximately 2 million people who would otherwise have been insured will remain uninsured as a result of the state’s action.

“Texas’ refusal to accept federal money to expand Medicaid will result in 184,192 more people experiencing depression, 62,610 more people suffering catastrophic medical expenses, and as many as 3,035 avoidable deaths,” said Dr. Steffie Woolhandler, a professor of public health at the City University of New York who is also on the faculty at Harvard Medical School.

The study includes a table showing expected excess deaths and other harms from opting out of the Medicaid expansion on a state-by-state basis.

“Medicaid is far from perfect,” said Dr. David Himmelstein, who also teaches at CUNY and Harvard. “In many parts of the country Medicaid pays so little that patients have trouble finding a doctor who will accept it. A single-payer program like Canada’s that covers all Americans is a far better solution for both the poor and the middle class. But until we get to single payer, Medicaid is the only safety net for many low-income Americans.”

In case you’re wondering exactly how Dickman came up with these death estimates and why the range is so large (I wondered the same thing) here’s his emailed response:

We estimated excess mortality associated with Medicaid opt-outs using two previous studies on the impacts of insurance on mortality, one published in 2009 by Andrew Wilper and colleagues in the American Journal of Public Health, and the other published in 2012 by Benjamin Sommers and colleagues in the New England Journal of Medicine. The studies looked at mortality effects slightly differently. Sommers et al found a 19.6 per 100,000 mortality decrease among the whole non-elderly adult population in three states that had previously expanded Medicaid eligibility (New York, Maine, and Arizona). In other words, a Medicaid expansion for a subset of the population led to a significant decrease in mortality in the entire non-elderly adult population. Wilper et al, on the other hand, looked at the mortality difference between the uninsured and the insured (since their study was observational, as opposed to Sommers’ quasi-experimental study) and found that the uninsured are 1.40 times as likely to die than the insured (after adjusting for many possible confounders.)

To calculate excess deaths based on the Sommers study, we applied their population-level estimate (-19.6 per 100,000 non-elderly adults) to the non-elderly adult population in opt-out states assuming his baseline mortality rate of 320 per 100,000 uninsured persons. That calculation led to the estimate that had there will be approximately 17,104 excess deaths in opt-out states (compared to if they had not opted out.)

To calculate excess deaths based on Wilper et al, we started with the same mortality rate among the uninsured (i.e., 320 per 100,000) and then applied their 1.40 estimate to conclude that the newly insured (but previously uninsured) population would have had a mortality rate of 320/1.4 = 228 per 100,000. Hence the difference in mortality is about -92 per 100,000 previously uninsured persons (vs. total non-elderly adult population, as in Sommers.) Applying this estimate to the number of people who would have received insurance had states not opted out of Medicaid expansion (i.e., 7.78 million people) we found that excess deaths will amount to 7,115 per year. Of course, there are inherent limitations in extrapolating from the (relatively) small Sommers study or the observational Wilper study, hence the wide range between the two estimates.