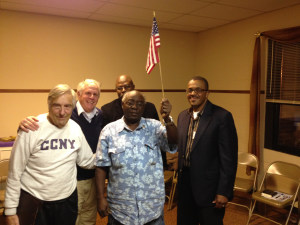 Today is Veterans’ Day—a time to honor those who have served in America’s armed forces and defend the freedoms our nation enjoys. But Virginia is not honoring all veterans.

According to The Commonwealth Institute for Fiscal Analysis, 25,200 Virginia veterans and their families could get quality, affordable health care through Medicaid expansion, but Virginia lawmakers refuse to participate in the program. These are people who served our country’s military, but now that they are no longer serving, Virginia has forgotten them.

The Commonwealth Institute says this: “About 38 percent of all uninsured veterans in Virginia and more than half of VA-only insured veterans could qualify for comprehensive care if state lawmakers closed the coverage gap. That’s because they had qualifying incomes below 138 percent of the Federal Poverty Level (FPL)—about $27,300 for a family of three—in 2014.”

Why are we letting our veterans down? Because Speaker of the Virginia House of Delegates Bill Howell is against “Obamacare” and refuses to allow bipartisan compromise approaches to expanding Medicaid. He and other lawmakers are playing politics with the lives of Virginians, including veterans.

Will you take a minute to call Speaker Howell and tell him that we need Medicaid expansion and that Virginians and Virginia’s veterans deserve better than partisan bickering and obstruction to access to health care? You can reach his office this week at 804-698-1028 or by email at delwhowell@house.virginia.gov.