Home » The Issues » Health Care » Survey: America’s Uninsured Rate is Down to 10 Percent – And Falling

Survey: America’s Uninsured Rate is Down to 10 Percent – And Falling 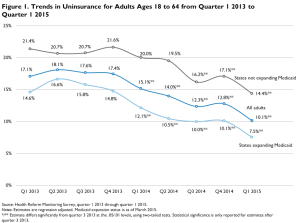 To read the full article, click here to be taken to Forbes Magazine.

New data has raised a tantalizing possibility: that for the first time, America’s uninsured rate will fall below 10 percent.

(If it hasn’t already; the most recently reported data was collected three months ago.)

And as of March 2015, the Urban Institute’s survey found that 10.0 percent of nonelderly adults were uninsured, down from 17.8 percent in September 2013, before the Affordable Care Act’s insurance exchanges first launched.

No major survey has ever found that the uninsured rate in America has hit single digits.

However, the uninsured rate is already down to 7.5 percent in states that have expanded Medicaid under Obamacare, Urban researchers concluded.