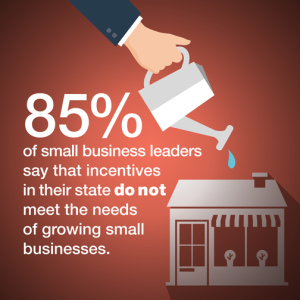 A large majority also say small businesses interests in economic development are not well represented in their state capitols. The credit crunch is a critical problem, and many also emphasize that public goods that benefit all employers-such as job training, education, and transportation-deserve to be a higher priority.

The study was funded by the Ewing Marion Kauffman Foundation. It is available on the Good Jobs First website at http://www.goodjobsfirst.org/levelfield

“Our findings are absolutely consistent with what we have heard for years from small business leaders,” said Good Jobs First executive director Greg LeRoy. “Despite their pro-small business rhetoric, state officials’ programs are perceived as biased in favor of large companies that receive big tax-break packages.”

The respondents lead groups from 25 states, including all but one of the 15 most-populous. They belong to networks formed in the past 15 years, many with economic development missions. None is contracted by state or local governments to perform economic development functions such as outside-firm recruitment.

Good Jobs First is a non-profit, non-partisan resource center on economic development. Founded in 1998, it is based in Washington DC.