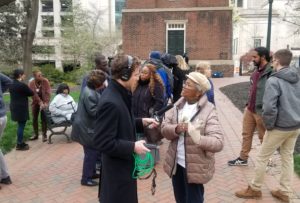 On April 2, we held a press conference in Richmond to call on Governor Ralph Northam and Attorney General Mark Herring to meet with us. It was covered in television news from Norfolk to Roanoke and on all the Richmond stations. Governor Northam’s office issued a statement saying that he has met with many “community leaders to hear their concerns and discuss meaningful ways of addressing racial equity in Virginia.”

The governor has not met with us or even responded to our requests to meet with him. He is carefully choosing the people he will talk to, but we believe that as an elected official his responsibility is to hear from all of his constituents.

As I said during the press conference, these scandals have happened not only to Governor Northam but to Virginia, to all of us. We want to offer him a way to move forward which will bring positive attention to the commonwealth and make us a model for the nation. We want to see profound, structural change. We want to see an end to the “Virginia Way” and business as usual.

I’m writing to ask you to contact Governor Northam at 804-786-2211 and let him know that you want him to meet with Virginia Organizing and consider our list of actions he can take to dismantle institutional racism. To see our list of actions, see the press release on our website.

You can also see a little of the generous television and radio coverage we received.