With your help, we’ve done great work this year. There have been too many local campaigns to include them all in our top ten, but please see some highlights of the year below. Your donation can make even more happen in 2019!

Virginia expanded Medicaid! Since the passage of the Affordable Care Act, Virginia Organizing worked statewide to convince members of the General Assembly to close the coverage gap so that everyone could get health care. Finally, in a special budget session last summer, they voted to expand the program. Since then we’ve been working to get the word out, and CoverVa.org has seen an avalanche of registrations. Nearly 200,000 people so far!

Pictured above: the Shenandoah Valley Chapters held a celebration with Senator Emmett Hanger (left), who did so much to make expansion a reality.

More than 120 members from across the state came together for the Grassroots Gathering in Wakefield, Virginia, this year. Our special guest speaker was Heather Booth, the founder of Midwest Academy. She offered us a passionate workshop on how to create a winning strategy for a campaign.

We also held two regional gatherings for skills workshops and community building. On April 14, all the chapters on the eastern side of Virginia met in Portsmouth. On June 2, four chapters from Lynchburg, the New River Valley, and Southwest met in Pulaski.

We hired three new organizers this year! Tony and Ciera are hard at work forming new chapters in Suffolk, Hampton, and Newport News. Willie has taken over the Eastern Shore. Robert started in Washington County and Lee County in 2017. They participated in a New Organizer Workshop led by experienced organizers in Charlottesville. 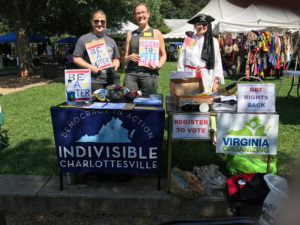 Chapter leaders registered voters and helped returning citizens get their voting rights back in several chapters. The Martinsville/Henry County Chapter provided voter registration in every public library in the city and county on National Voter Registration Day. Charlottesville volunteers devoted many weekend hours to voter registration before the election.

Pictured above: Dell Erwin dressed as a pirate for a local community gathering. “I had a treasure chest of toys for kids (booty), tiny apples, raisins, gum, etc.,” Dell reported. “So while I’m giving away toys, other volunteers would interact with the adults. Note: I have to use a cane because of my peg leg.”

The Harrisonburg Chapter continued its work for immigrant rights by partnering with other groups in several rallies to protect TPS recipients (Temporary Protected Status). This Journey for Justice rally (pictured above) on November 4 concluded with a visit to Representative Bob Goodlatte’s office to deliver a petition for immigration reform.

Every chapter visited their delegates and senators in the General Assembly this year, both in Richmond and in district. They made sure these decision makers knew they wanted them to act on Medicaid expansion, school discipline reform, and many other issues! A group of leaders also met with the state Secretary of Education Atif Qarni and Deputy Secretary Holly Coy. 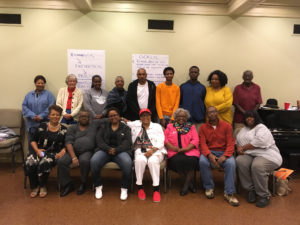 Every chapter held a one day Dismantling Racism workshop this year. Graduates of those workshops participated in a three day workshop in November in Harrisonburg.

Pictured above: the Southside chapters joined together for this one day workshop in October.

In Portsmouth, Danville, Bristol, Newport News, and Pennington Gap, we teamed up with the Virginia Poverty Law Center (VPLC) to offer predatory lending forums. Lawyers from VPLC provided free advice about how to get out from under destructive online loans. Chapter leaders educated the public about the harm this type of lending does to communities and organized letter writing campaigns to call for a cap on interest rates.

Pictured above: Dana Wiggins from VPLC speaking at the Portsmouth forum.

Chapters have begun to develop environmental justice campaigns. From the coalfields of Southwest to the flooded neighborhoods of Danville and Portsmouth, leaders experience the destructive effects of fossil fuels and policies that fail to protect communities from harm.

Pictured above: the Staunton/Augusta County/Waynesboro Chapter participated in a forum with the Chesapeake Climate Action Network called “From Pipelines to Progress” on December 12 in Staunton. 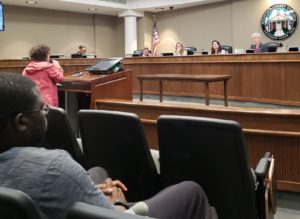 Last but definitely not least: the Fredericksburg Chapter continues to make progress in its affordable housing campaign! Leaders have met with the boards and councils of all area municipalities. They’ve recruited the support of the local paper, the Free Lance-Star, for their proposed affordable housing trust fund. They plan to hold a rally on January 12 to keep the pressure up.

Let’s keep moving forward together! Thank you for donating to Virginia Organizing today.

Pictured above: leader Deborah Snyder speaking to the Stafford County Board of Supervisors in May (and Virginia Organizing board member Duane Edwards in the foreground).