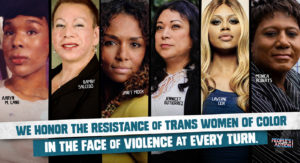 Today is Trans Day of Remembrance, when we honor the lives of those who have been killed in violence against transgender people. We also ask you to take action to protect the rights of trans men and women.

By denying trans people civil rights, Jeff Sessions is aiding in the brutality they face.

The year is not over, but 21 murders have been reported. This number doesn’t reflect the trans people who go unreported or are reported under their birth name and sex.

Trans rights are human rights. We demand that Jeff Sessions restore and protect the rights of all trans people.