President Trump’s tax plan contains specific, costly tax cuts for the wealthy and profitable corporations but only vague promises for working families.[1] Even accounting for his proposal to restrict most itemized deductions, the top 1 percent would still receive annual tax cuts averaging at least $250,000 per household. But the tax cuts at the very top would be far larger. The 400 highest-income taxpayers — whose incomes average more than $300 million a year — would get average tax cuts of at least $15 million a year each, we estimate from IRS data. Their annual tax cuts would be more than five times the typical college graduate’s lifetime earnings.[2] (See Figure 1.) The total tax cut for these 400 households would be at least $6 billion annually. 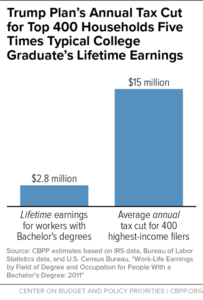 The Trump plan prioritizes these tax cuts for the highest-income Americans over many worthy programs that need more resources. For example, $6 billion is more than the federal government spends on grants for major job training programs to assist people struggling in today’s economy. An additional annual investment of $6 billion could enable roughly 1.5 million adults each year to train for a new career.[3]

Also, $6 billion is roughly the cost of providing 600,000 low-income families with housing vouchers that would help them afford decent, stable housing. That additional investment could eliminate homelessness among impoverished veterans, families with children, and people with mental illness or other disabilities, and reduce housing instability among these and other at-risk groups.[4]

Yet, far from investing in these areas, President Trump has proposed to sharply cut the budget area (non-defense discretionary programs) that funds job training and housing vouchers, even as his tax plan delivers massive tax cuts to the top.[5]

Our estimates are based on the tax cuts that the top 400 would receive from just two provisions of the Trump plan: reducing to 15 percent the tax rate on “pass-through” business income (income from businesses such as partnerships, S corporations, and sole proprietorships that is claimed on individual tax returns and is taxed at the same rates as wages and salaries) and repealing the 3.8 percent Medicare tax on unearned income that high-income households receive.

The top 400 would receive average tax cuts of at least $15 million annually from just these two provisions (assuming they have similar income levels and income sources as in 2014). This estimate likely significantly understates the tax cuts for the top 400 because it covers only two provisions that represent about one-third of the Trump tax plan’s overall cost. The estimate omits various costly, top-tilted proposals that would benefit the top 400, including cutting the corporate tax rate by more than half (from 35 to 15 percent), cutting the top rate on wages and salaries by nearly five percentage points (from 39.6 to 35 percent), and repealing the estate tax on inherited wealth (which only affects the wealthiest 2 out of every 1,000 estates).[8] These further tax cuts would likely dwarf any effects from the few offsets the plan identifies, including eliminating the deduction for state and local taxes.

While the Trump tax plan would clearly shower windfall tax cuts on those at the very top, it provides little detail on whether or how it would help working families. Indeed, the plan wouldn’t provide any tax benefits to at least 17 million working families and individuals because they don’t earn enough to owe federal income taxes (though most pay significant payroll and other taxes). Those families would very likely be worse off under the plan because policymakers eventually would likely pay for the large tax cuts for the very wealthy at least in part by cutting programs on which they and millions of other low- and middle-income families rely.[9] End Notes