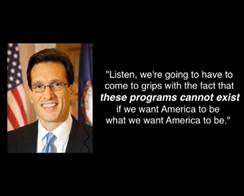 Watch the ad here: (and see a transcript of the ad below) https://www.youtube.com/watch?feature=player_embedded&v=2MQID6sV6m0

Campaign for America’s Future plans to raise money for more ads in Rep. Cantor’s district and has set up a page for people to see the ad and contribute to the buy, at this link: https://caf.democracyinaction.org/o/11002/donate_page/fightcantor

Roger Hickey, co-director of Campaign for America’s Future said, “Social Security enjoys broad support among Americans of all ages because it is a reasonable and fair program designed to help those that need it most: the elderly and the disabled. In most cases, these are folks who have worked hard for many years and deserve the modest benefits Social Security has promised them. Rep. Cantor’s constituents need to know that the America he envisions includes draconian cuts to Social Security. Through this ad, the citizens of the Commonwealth of Virginia will be able to hear Rep. Cantor talk about Social Security in his own words.”  Hickey noted that the audio in the TV spot was recorded from Rep. Cantor’s remarks to the conservative Hoover Institution, as reporters by National Public Radio.

Hickey noted that 16.4 percent of the population of the 7th district of Virginia received Social Security benefits in 2009. That’s 119,949 of Rep Cantor’s constituents. That includes 81,332 retirees, and 14,812 disabled Virginians.

Speaking at the Hoover Institution, March 21, 2011

CANTOR AUDIO: Fifty percent of beneficiaries under the Social Security program use those moneys as their sole source of income. So we've got to protect today's seniors. But for the rest of us? Listen, we're going to have to come to grips with the fact that these programs cannot exist if we want America to be what we want America to be.

Sponsored by Campaign for America’s Future

For more information here is a fact sheet on Virginia and Social Security: http://strengthensocialsecurity.org/sites/default/files/Social-Security-Works-for-Virginia_August-24_Definitive_Final.pdf

Link to this press release: http://www.ourfuture.org/news-release/2011041408/tv-spots-remind-rep-cantor-s-constituents-about-his-social-security-cannot-e