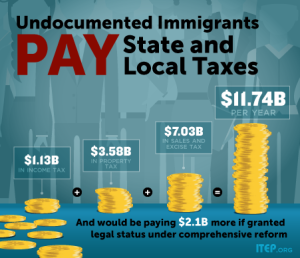 Va. — Undocumented immigrants pay more than $250 million in Virginia state and local taxes a year, according to a new study.

The Institute on Taxation and Economic Policy looked at the total sales, real estate, and state and local income taxes paid by undocumented workers in all 50 states. According to Meg Wiehe, director of programs at the institute, undocumented immigrants nationally pay close to $12 billion each year.

She said the results speak to concerns from many who wonder if immigrants are paying their “fair share.”

“And the answer is yes, definitively yes,” Wiehe said. “In fact, they’re paying a higher share of their income in state and local taxes than the average taxpayer in the top 1 percent.”

She said the national total would increase another $2 billion if those same individuals were allowed to work legally under comprehensive federal immigration reform. The report notes that many undocumented immigrants also pay federal payroll and income taxes, as well as excise taxes on necessities like fuel.

A 2010 report from the Congressional Budget Office estimated full immigration reform at the federal level would generate more than $450 billion in federal revenue over the next ten years.

But Wiehe said any mass deportation policy would cost the nation more than just the billions in tax revenue immigrants contribute to the state and the nation.

“Forcing out that many people would inevitably entail huge disruptions to the economy – as well as to our social and political fabric – that go far beyond the loss of workers and tax dollars,” she said.

The institute’s new report showed that, on average, undocumented immigrants paid 8 percent in state and local taxes – on par with middle-income taxpayers.