Home » The Issues » Anti Discrimination » Update: We Met with the Governor

Update: We Met with the Governor 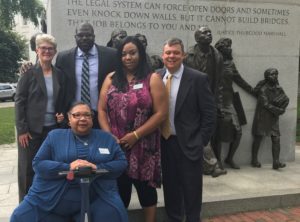 As you know, after Governor Ralph Northam announced that he was not going to resign, Virginia Organizing called for him to meet with us and take steps to dismantle institutional racism in Virginia. On Friday, May 31, we had our meeting with Governor Northam and several members of his staff.

I was there along with board members Sandra Cook, Duane Edwards, and Ebony Guy, and Executive Director Brian Johns. We felt the governor gave us a generous amount of time and listened carefully to everything we said. He apologized to Ebony when she spoke about the pain and anger the revelation of the yearbook picture had caused her.

On the other hand, all of the staff who attended the meeting were white. The governor mentioned that his new diversity officer will be starting work soon, and we hope that that person will be able to make a difference. We did not receive any commitments in response to what we asked, but he also did not reject our proposals.

We believe our top priorities are things that can be done soon to make progress against systemic racism. They would make a profound difference in the way the Commonwealth does its work.

For the original list of what we asked of him, Attorney General Mark Herring, and Senator Tommy K. Norment, please see our press release.

Thank you for your support,