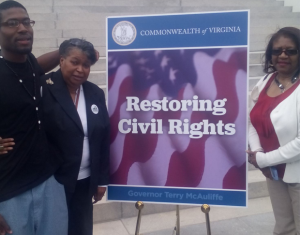 Virginia Governor Terry McAuliffe announced a new process for restoration of civil rights on Monday, August 22 to comply with the Supreme Court of Virginia orders on July 22, 2016.

In April, the Governor issued an order to restore the rights of all Virginians who had completed their prison sentence and completed all conditions of probation and/or parole as of April 22, 2016. He also issued similar orders in May and June.
Virginia General Assembly leaders believed the Governor did not have this authority and sued the Governor. The Supreme Court of Virginia heard the case on July 19. At the time of the lawsuit, about 13,000 Virginians who had their rights restored under the Governor’s order had registered to vote.

On July 22, the Supreme Court of Virginia decided that the Governor did not have the authority to issue a “blanket” restoration order and must review each case before restoring civil rights of returning citizens. The court also ordered the Department of Elections to cancel all the voter registrations of those who registered under Governor McAuliffe’s orders in April, May, or June.

Virginia Organizing State Governing Board member and returning citizen Duane Edwards issued a statement in response to the decision: “As a returning citizen, I know firsthand what it means when you can’t vote because of your past. We are appalled by those politicians like Speaker of the House of Delegates Bill Howell who have consistently put political ideology over the people of Virginia. It is unfair for returning citizens to hear that we deserve a second chance from politicians while they actively work against that second chance. Today goes down in history as another victory for Jim Crow and voter suppression, but we will continue to fight to overcome.”

Exactly one month after the court decision was issued, Governor McAuliffe announced that he had restored the rights of most of the 13,000 people who had registered under previous orders and plans to review the remaining cases known to the Governor’s office for restoration.

Any returning citizen, regardless of what crime he or she committed, may request expedited restoration (which will be prioritized by the Governor’s office for restoration as they are received).

“The process might change, but we will continue to organize and engage people for a more just Virginia,” said Edwards.