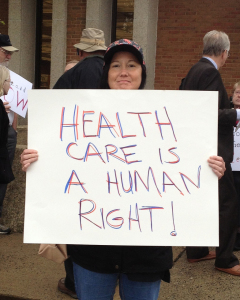 A group is organizing a rally in Accomack County this weekend in support of the Affordable Care Act. The event will be held near the site of the new Riverside Shore Memorial Hospital.

Virginia Organizing in Eastern Shore announced it will hold a public demonstration in support of the Affordable Care Act, often called Obamacare, on Saturday, Feb. 4, at noon in the Peebles’ parking lot at Four Corner Plaza in Onley.

The address is 25342 Lankford Highway.

It is the second time in as many weeks a group has held a public demonstration at the location.

More than 70 people turned out there on Jan. 21 for a local Women’s March held in conjunction of the Women’s March on Washington, D. C.

Community members at the event will tell their stories about how the Affordable Care Act has benefited them and their families.

“If pre-existing conditions and lifetime limits were to be taken away, I would be in big trouble,” said the Rev. Berkeley Ford, adding, “In the last five years, I have needed at least a quarter of a million dollars to treat cancer and coronary issues.”

Ford raised concerns about rural hospitals, saying, “If there is no insurance available, how can small hospitals absorb the cost of people without insurance using the emergency room for primary care?”

Eastern Shore resident Al Willis said he is concerned about the status of health care in the United States.

“I am on Medicare, and if the Affordable Care Act is repealed, I am worried that I will no longer receive medical screenings free of charge,” Willis said, adding, “I can’t afford the cost if that benefit is taken away.”

Participants also will write letters to Sen. Mark Warner “asking him to do everything in his power to support the ACA and expand health coverage to more people,” the release said.

Virginia Organizing — a statewide, grassroots group founded in 1995 under the name the Virginia Organizing Project — is holding similar events around the state in January and February, calling on Congress “to improve on existing plans, close the gap, and expand coverage for more people,” according to the release.