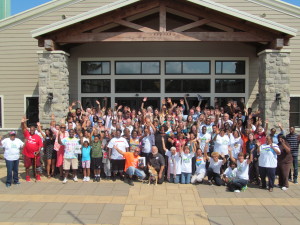 Virginians from Harrisonburg to Southwest Virginia to South Hampton Roads and everywhere in between gathered September 16-18 at Smith Mountain Lake 4-H Center to celebrate accomplishments, learn new skills, and become better equipped to organize to build strategic power in the state.

Grassroots Gatherings are annual meetings that began in 1995. Early on, the meetings spanned the entire weekend. For a while, Virginia Organizing held one-day workshops in place of a full weekend, but found more value in the weekend retreat-style format for Chapter leaders to go in-depth on particular issues and to attend multiple workshops.

This year, leaders learned more about education justice issues like the school-to-prison pipeline, opportunity gaps in schools, and suspension rates. Virginia Deputy Secretary of Education Holly Coy spoke on Saturday and answered questions about reducing suspensions and bias in the schools.

“I was excited to see the passion for education from parents, grandparents, students, and community members with Virginia Organizing,” said Coy. “I am hopeful that these leaders will take what they learned back to their localities and support positive changes for all students in our commonwealth.”

“Grassroots Gathering 2016 was quite empowering and moving, and definitely showed the powerful impact the organization is making,” said Fredericksburg Chapter leader Reva English. “I realized that it literally takes the masses and we are collaborating with organizations like People’s Action and others to create big changes in Virginia and the U.S. I learned that endurance, partnership, and perseverance solidify change.”

“I have been a part of Virginia Organizing since the beginning and I am still learning new things,” said Maura Ubinger, who was at the first meeting in 1995. “It was a wonderful weekend and I was particularly moved by what I learned in the school-to-prison pipeline breakout session this year. I am glad I got to participate in this year’s gathering!”

“This was my first Grassroots Gathering. This weekend was really inspiring and I’m excited to bring this momentum back to Lynchburg.” said Lynchburg leader Susie Joiner. Lynchburg leaders are working to become the next Virginia Organizing Chapter.

“What I learned was about the obstacles of the deaf and hard of hearing community. I wish all citizens that reside in our country would have been able to witness the struggles of this often overlooked community,” said Harrisonburg Chapter leader Jeff Dyche.

Grassroots Gathering 2017 is currently being planned for next fall. Look for details on our website and in your inbox early in 2017. If you’d like to be a part of the planning committee, contact Nik Belanger at nik.belanger@virginia-organizing.org. for more information.