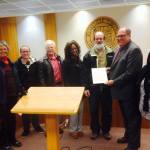 Originally posted by the Wytheville Enterprise on March 10, 2015.

For the past 20 years, Virginia Organizing has addressed issues that affect the quality of life of Wythe and Bland residents. The non-partisan statewide grassroots organization remains dedicated to empowering people in local communities to challenge such injustices as discrimination and economic conditions.

Throughout the year, Virginia Organizing will celebrate its 20th anniversary with special events across the state. The organization was presented a resolution last month from Wytheville Town Council following a dinner for directors at the Wytheville Presbyterian Church.

Andy Kegley, executive director of HOPE Inc. in Wytheville, was among the first members of Virginia Organizing when it was founded in August 1995. During his tenure, he held a dismantling racism workshop and raised concerns locally about minimum wage.

“I’m proud to be a part of Virginia Organizing,” Kegley said. “Virginia Organizing gets people active around important issues that matter to their lives and helps develop and empower community members to be leaders and make changes to better the whole community.”

Joe Szakos is the founding director of Virginia Organizing headquartered in Charlottesville. He noted the program in Wythe and Bland is no longer active.

“We certainly hope to revive it,” Szakos said. “Anyone interested in the chapter can do it.”

In its resolution, Wytheville Town Council noted Virginia Organizing “believes that community, economic, social and environmental policy should be developed with the greatest input from the people it is meant to serve and that policies should promote, celebrate and sustain the human and natural resources of Virginia.”