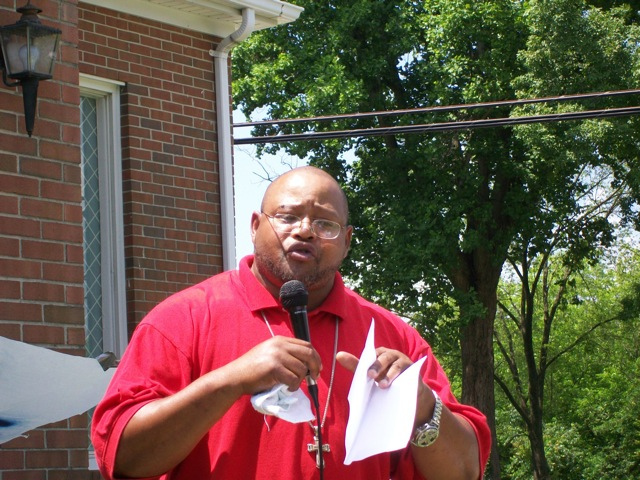 Danville, VA – Members and supporters of the local chapter of the Virginia Organizing Project gathered outside the Greater Living Word Ministry today to call on Congress and the President to support the Local Jobs for America Act (HR 4812), legislation that could create a million public and private sector jobs in local communities facing severe unemployment.

Despite some recent improvement, Danville’s unemployment rate hovers at 14.6 percent, nearly twice the state average. The recession and budget shortfall only adds to already-high unemployment in Danville, with local government making difficult decisions to cut critically important jobs and services.  The goal of the Local Jobs for America Act is to put people back to work improving their communities and could potentially create 145 jobs in Danville alone. The legislation would provide Danville with $8 million for job creation, job training, local infrastructure investment and incentives for small businesses to hire local workers.

Local faith and community leaders addressed the crowd on Wednesday, illustrating the dire need to bring jobs to Danville. “The Local Jobs Act will begin by bringing 145 more jobs to the area and opens the door for more things to come. Right now we need jobs and education resources in Danville. This legislation is a huge step in the right direction,” said Reverend Reginald Fitzgerald of the Greater Living Word Ministry.

“We need an emergency response to the recession and we must create jobs immediately. People in Danville are hurting and we cannot afford to keep losing jobs,” said Avon Keene of the Southern Christian Leadership Conference.

“A day never goes by where I don’t hear from someone who has been laid off, cannot find a job or is about to be evicted. We have lost so many jobs in Danville and the effects of unemployment are ripping apart our community,” said Theresa Carter, Virginia Organizing Project leader. “Local service groups are doing all they can to help but there is only so much they can do to address the issue. This bill is so important because it would generate millions for the area and with the help of local leaders would put the money back into the community where it belongs. When I read the legislation, I thought ‘Finally someone gets it! No one knows the needs of the community better than the local people!’”

The event took place on the very day that thousands of workers nationwide lost their jobless benefits. The House of Representatives voted Friday to extend unemployment benefits due to expire today. However, the Senate failed to act prior to taking a 10-day Memorial Day recess, allowing the benefits to lapse. The unemployment insurance and COBRA programs are available to unemployed workers and their families-providing a lifeline and important economic stimulus. Congressman Tom Perriello voted in favor of extending the unemployment benefits on Friday. Community leaders at the event thanked their Congressman and remarked that the need to extend jobless benefits goes hand-in-hand with the need for Congress to pass a strong local jobs bill.

“We have made some tough choices in Danville and we expect our leaders in Washington to do the same. Now is the time for Congress to make sure our communities don’t fail by investing in job creation. Investing in people is a good investment. Once people have jobs, they pay taxes and starting returning on the investment right away,” said Reverend Delaware Clark of Camp Grove Baptist Church. “As we have seen over the years in Danville, everything is connected. When a mill closes down there is a domino effect. You not only lose the jobs at the mill but also the support industry around it and the local businesses that depend on wage earners to buy their products. It’s time to bring in jobs that will help the economy in the short term and start a positive domino affect to create more jobs in the long-term.”

After the speaking program, a Job Information and Civic Engagement Fair was held inside. Local residents took action by contacting their elected officials on the need to pass the Local Jobs for America Act and took photos for a photo petition to be sent to members of Congress. Community members registered new voters. Local community and education organizations were also on-hand to share information on employment and education opportunities in Danville.

The “Putting Danville Back to Work” event is part of a nationwide week of action during Memorial Day Congressional recess highlighting the need for direct job creation. Local organizations around the country held jobless fairs and other events in support of direct job creation.