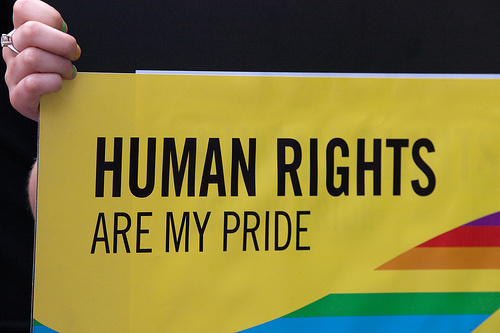 Good morning. My name is Ladelle McWhorter, and I am the Vice Chairperson of Virginia Organizing. Virginia Organizing is a statewide grassroots organization that brings people and communities together to work for a more just Virginia. For many years, Virginia Organizing has stood with the LGBT community to fight against discrimination in all facets of life. Today, we are very happy to stand with Senators McEachin and Ebbin, as well as Equality Virginia and other advocates, to support senate bill 701.

With SB 701, we have an opportunity to ensure that no current or future politician gives prejudiced individuals in state agencies license to discriminate against LGBT individuals, people with disabilities, pregnant women, veterans, and others. We have an opportunity to create a policy that embraces our differences and reminds all Virginia's citizens that we are valued for our perspectives, skills, and, experience and that no one will be automatically dismissed because of those very strengths.

Virginia Organizing believes diversity is one of the cornerstones of our communities. Diversity is a fact about Virginia's communities, but it is more than a fact; diversity–of perspective, skill, knowledge, and life experience gives our communities resilience, versatility, and strength. Diversity fosters growth, empathy, and value in communities, schools, and workplaces. Those important qualities and values are undermined when some citizens, because of prejudices some hold against people like them, are denied the chance to contribute to the work of the Commonwealth.

Members of Virginia Organizing regularly speak out against discrimination of all kinds, so we know how hard a job it can be. We applaud the General Assembly for taking up the issue of banning discrimination in state employment and hope that our representatives have the courage to act to make this important, community-building bill the law of the land.

Codifying non-discrimination sends a clear message: Virginia will not stand for the discriminatory employment practices of the past, practices that were destructive of our communities and that threatened our citizens' livelihoods and well-being. When passed, this bill will move us toward a better, stronger Virginia.

On behalf of Virginia Organizing, I urge our General Assembly and Governor Bob McDonnell to make non-discrimination in state employment the law of Virginia. Ladies and Gentlemen, let’s pass this bill!