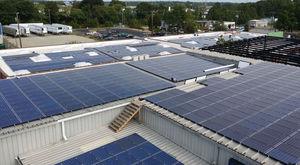 JERRY PETERS/SCOTT’S EDGE APARTMENTS
The Scott’s Edge apartment complex in Richmond has nearly 1,000 solar panels on its roofs capable of generating 238 kilowatts, which is enough to power the building during the day and allow the sale of some of the electricity, one of the building’s owners said.

Published in the Richmond Times-Dispatch

Virginia remains one of the worst states in the country for solar energy, according to a report released today by the Environment Virginia Research and Policy Center.

“Even though Virginia has solar growth, other states have been doing more and doing it faster,” said Becca Oliver of Environment Virginia, which is holding a press conference this morning at a solar-powered apartment complex in Richmond to discuss the report.

Oliver said that although Virginia’s solar capacity increased from 12 megawatts in 2014, its ranking dropped from 32nd to 39th.

“This does not factor in several large-scale projects about to come online, but it still is not growing that fast,” she said.

The nation’s solar energy capacity has grown 13-fold since 2010, but it is concentrated in just a few states.

The top 10 states in the country have seven times more solar power capacity than the rest of the nation combined.

“The states reaping the largest benefits from the growth of solar energy are not necessarily those with the most sunshine,” the report finds. “Rather, they are the states that have laid the policy groundwork to encourage solar energy adoption.”

For example, Virginia’s renewable energy standards are voluntary, while other states have adopted minimum amounts as policy.

There have been signs of slow change in Virginia. Richmond-based Dominion Virginia Power, the state’s largest utility, recently won approval for three new solar farms as part of its pledge to build 400 megawatts of solar capacity by 2020.

Gov. Terry McAuliffe in December pledged that state buildings would derive 8 percent of their electricity from solar power within the next three years. That translates to about 110 megawatts, or enough to power about 27,000 homes. But it’s still less than North Carolina installs in a single year.

Even as the costs of solar technology have dropped dramatically, it still comes with a downside. Panels only produce electricity about a quarter of the time — only when the sun is shining.

But that is enough to help achieve a 72 percent savings in energy costs for the Scott’s Edge apartments in Richmond, co-owner Jerry Peters said.

The 94-unit complex in Scott’s Addition has nearly 1,000 solar panels on its roofs capable of generating 238 kilowatts of electricity — enough to power the building during the day with a substantial amount remaining to sell to Virginia Power, Peters said.

“It has reduced our operating expenses while improving the value of our property, and it allows us to present this as a green property,” said Peters, who owns the building with Jim Edge.

In addition to the solar panels, which contribute more than a third of the complex’s power needs, Scott’s Edge also has central, highly efficient systems for heating and cooling and hot water, rather than individual HVAC units and hot water heaters for each unit.

But the solar energy savings for Scott’s Edge have not been as great as they would be in other states, Peters said.

McAuliffe has vowed to recruit solar industries to Virginia so the state can reap some of the economic benefits that have come to its more solar-friendly neighbors.

The industry, which in the U.S. has been growing as much as 20 times faster than the rest of the economy, has provided a $2 billion boost to North Carolina’s economy and employs about 3,000 people in Maryland.