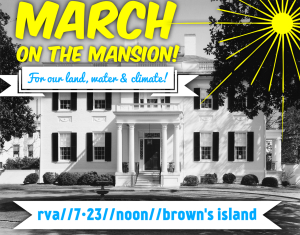 Virginia Organizing will join with more than 60 other groups on July 23 to march on the Governor’s mansion to demand climate justice from the administration.

Governor Terry McAuliffe has presented himself as a public official who cares about the environment while standing with Dominion Power against the Environmental Protection Agency’s Clean Power Plan and in support of natural gas pipelines and power plants fueled by fracked gas.

Grassroots people who are suffering from the harmful effects of climate change are no longer willing to stand silently by and wait for weakened changes that benefit corporations and hurt people.

“Virginia Organizing is committed to clean energy to create new jobs and to protect our precious natural resources,” said Del McWhorter, Chairperson of Virginia Organizing. “It is time for Governor Terry McAuliffe to take action and for that action to be in the interest of the people of Virginia, not those who represent the big polluters.”

“We’ve sent thousands of petitions, shown up at public events, and invited the Governor to tour our threatened homes, asking him to protect our land, air, and water, and to be a champion of truly clean energy. Our voices have not been heard yet — so we’re bringing those voices together right at his doorstep,” said Virginia Organizing State Governing Board member Jay Johnson.

Virginia Organizing leaders from all across the state have been working to promote climate justice.

Southwest Virginians fought against hydrofracking to protect their land and water. The local government in Washington County voted to allow fracking, so the leaders began water testing to create a baseline measurement of water quality. The companies have not started fracking in the area.

In South Hampton Roads, leaders have spoken out and shared their personal stories of flooding in the area as a result of sea level rise. While Governor McAuliffe has focused some attention on sea level rise in the area and secured federal funding to address this issue, limited action has been taken to rectify the problems outlined in a review of hurricane preparedness.

Virginia Organizing leaders were featured in a recent documentary about the flooding in the Hampton Roads area called Facing the Surge (soon to be released at www.adaptationnow.com).

Johnson understands this crisis is eminent. “I moved out of one of the most flooded cities into one of the most air polluted cities in Virginia and know the harmful effects of environmental damage. I have witnessed sea level rise and know the damage that flooding causes for our communities. I know that we need to act now to prevent more damage and change the course of environmental destruction,” she said.

Will you join us on July 23? Click here to register.