Will You Help Protect Health Care? 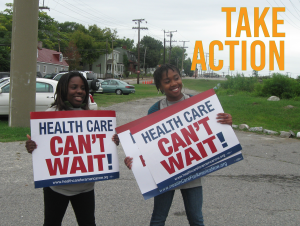 When health care is under attack, what do we do? Stand up, fight back!

That’s just what we need your help with. Right now, Congress is poised to eliminate the subsidies for the Affordable Care Act (ACA) Marketplace plans (which will make health insurance unaffordable for many), take away Medicaid expansion from millions of Americans, and flood the health insurance market with sicker people by getting rid of the individual mandate.

For the first time since the Affordable Care Act was passed, opponents of this plan have enough votes in the U.S. House of Representatives and U.S. Senate and the full support of the incoming U.S. President to take away those important protections. Right now, they only have the votes to repeal the financial parts of the ACA through the budget reconciliation process and not the important protections like the regulations protecting those of us with pre-existing conditions, requiring certain standards of coverage, and protecting young people by allowing them to stay on their parents’ plans until age 26.

Without funding for subsidies, an individual mandate, and Medicaid expansion, the entire health insurance market is threatened.

If you want to protect your health insurance and the Affordable Care Act, we need you to act quickly. Here are three steps you can take:

There are millions of reasons why we shouldn’t repeal the ACA:

We don’t know what’s going to happen in the coming days, but we do know that many opponents of the Affordable Care Act are allowing their other beliefs to be compromised so they can repeal this law.

We need to act now.