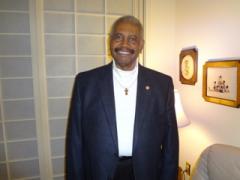 Winston Whitehurst is the leader of the Affordable Health Care Coalition for South Hampton Roads. He has also been a strong voice on other issues of social and economic justice. Winston has been involved with Virginia Organizing since 2009 when he began working to get the Affordable Care Act (ACA) passed. Since that time, he has served on Virginia Organizing’s statewide Health Care Strategy Committee and organized presentations about the benefits of the ACA in his local community.

In the past few months, Winston has been working hard on Medicaid expansion in Virginia. He made presentations to city councils to ask them to pass resolutions in favor of Medicaid expansion and he met with legislators at the General Assembly to explain the benefits of expansion.

“We have to continue to work for affordable health care, equity and justice in all areas of social and economic justice,” said Winston. “I agree with Franklin Roosevelt that we can’t be a great nation if we don’t take care of those who are sick and in poverty.”

Winston is an asset to the South Hampton Roads Chapter and community. Thank you, Winston, for all your hard work!