Death Penalty Support, Use Erodes in Virginia and U.S. 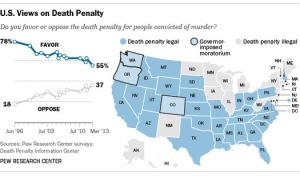 Listen to the story at Public News Service.

The death penalty is in a long, slow decline in Virginia and nationally, according to opinion polls and how often it’s being used.

Robert Dunham, executive director of the Death Penalty Information Center, says surveys show support for the death sentence is at a 40-year low, and last year saw the lowest number of executions in two decades.

Dunham says people are seeing practical problems with putting people to death, including the costs and botched executions. There also has been what he calls an innocence revolution – a wave of death row inmates later proven not guilty.

Although Virginia executed Alfredo Prieto a month ago, the number of executions in the state has fallen sharply. Dunham says Virginia used to have one of the highest execution rates, until a court decision that changed jury instructions reduced the number of death sentences by three-quarters.

Dunham explains there used to be the misconception that if a capital convict was not executed, he or she could eventually be released on parole.

But he says court rules were changed so that juries would be informed that a life sentence would really mean life behind bars.

“Immediately when the juries were told that their sentencing option was life without possibility of parole and death, as opposed to just life or death, the rate of death sentencing dropped dramatically,” he explains.

One Virginia death row inmate was exonerated and then pardoned in 2000. The state has also had complex problems getting the drugs used for lethal injections.