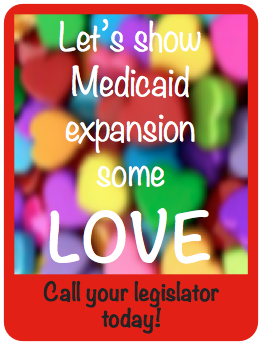 "Roses are red,"
Begins poems today.
We need Medicaid expansion,
Virginia cannot delay!
The Virginia Senate and House of Delegates have named the following legislators to the Conference Committee on the Budget — they will decide if Medicaid expansion will be implemented in Virginia without delay.
House of Delegates Conferees
Lacey Putney
Steven Landes
Beverly Sherwood
Kirk Cox
Chris Jones
Johnny Joannou
Senate Conferees
Walter Stosch
Janet Howell
Charles Colgan
Emmett Hanger
John Watkins
Thomas Norment
The House version of the budget bill requires reforms of the Medicaid program beforethe General Assembly can even consider implementing Medicaid expansion in Virginia. This approach will delay the decision whether or not to proceed with expanding Medicaid to low-income workers and individuals until at least the next General Assembly session.
The Senate version of the budget bill includes reforms and expansion of Medicaid without delay. This means that Virginia would be able to begin Medicaid expansion as early as January 1, 2014. If we expand Medicaid without delay, more Virginians’ tax dollars will support the people of Virginia instead of going to other states that have already taken steps to expand Medicaid. Every day we delay expansion after January 1, 2014, we lose approximately $5 million of federal funding.
If your legislators are on the Conference Committee (above), we need you to contact them immediately.
If your legislators are not on the Conference Committee, it is still important for you to call them now! Will you take the time to contact your legislators and simply say, "Please support the Senate budget amendment to expand Medicaid without delay! Virginians cannot wait."
If you are unsure of your legislators, click here to find out who your legislators are and how to contact them. If you know one of your legislators is a conferee, just click on his or her name above for contact information.
For everyone:
Will you also call Governor Bob McDonnell at 804-786-2211 with the same message?
After you call, will you ask three friends to call and urge our legislators and Governor McDonnell not to delay on Medicaid expansion? This is an excellent opportunity to take action on an issue that will affect hundreds of thousands of Virginians!
Thanks for all your hard work on this issue!
2013-02-14
VA ORG Admin
A Valentine for Medicaid Expansion: Action Alert! Reviewed by VA ORG Admin on Feb 14. February 14, 2013 "Roses are red,"Begins poems today.We need Medicaid expansion,Virginia cannot delay!  The Virginia Senate and House o February 14, 2013 "Roses are red,"Begins poems today.We need Medicaid expansion,Virginia cannot delay!  The Virginia Senate and House o Rating:
Virginia Main Street Alliance Updat...A Letter to the Governor