About the Eastern Shore Chapter 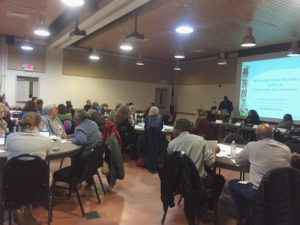 The Eastern Shore Chapter first began meeting in March 2016, when 31 people attended a meeting at Mary N. Smith Cultural Center. The group spent two years doing core development work, leadership training, and establishing connections and trust with each other. In December 2017, at their holiday party, 31 members signed the petition to become the next formal Virginia Organizing chapter.

Over the past couple of years, the new chapter has hosted a Dismantling Racism workshop and a New Member Orientation. Members held a rally for the Affordable Care Act in the middle of winter, which over 50 people attended. Most recently, they have decided to work on the school-to-prison pipeline. Their first forum attracted 40 parents, educators, and community members at large, and hosted panelists from the Virginia Department of Education, Legal Aid Justice Center, and a former school board member from Accomack County. They have created a comprehensive plan in their new campaign to engage the community, schools, and the school board in decreasing suspensions in both Accomack and Northampton Counties.