Home » The Issues » Immigration Reform » 200,000 Salvadoran Immigrants May Be Forced to Leave U.S.

200,000 Salvadoran Immigrants May Be Forced to Leave U.S. 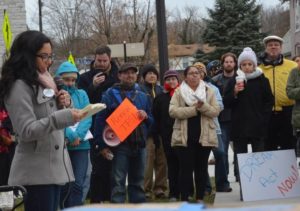 (Pictured: The Harrisonburg Chapter’s March to defend DACA and TPS in December, 2017)

“The Trump administration has canceled the provisional residency permits of about 200,000 Salvadorans who have lived in the country since at least 2001, leaving them vulnerable to deportation, according a copy of a Department of Homeland Security announcement sent to lawmakers Monday.

The administration will notify the Salvadorans they have until Sept. 9, 2019 to leave the United States or find a new way to obtain legal residency.

The Salvadorans were granted what is known as Temporary Protected Status, or TPS, after a series of earthquakes devastated the country in 2001.”