Home » Chapters » Southwest » Agency that got its start in SWVa. celebrates two decades of success

Agency that got its start in SWVa. celebrates two decades of success 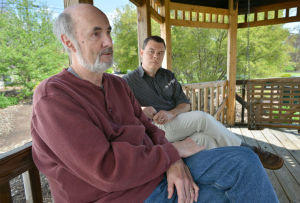 ABINGDON, Va. — In 1994, a community organizer came across the border from Kentucky into Southwest Virginia and started talking to folks — about their communities, and about what needed to change.

“What we found was so much of the social justice work was single-issue,” said Steve Fisher, who worked with that organizer, Joe Szakos, in the mid-90s. “What he brought with him was grassroots, long-haul, multi-issue.”

Fisher and several others were on the founding charter of what was then called the Virginia Organizing Project, a campaign that this year is celebrating its 20th year.

Szakos is still the executive director of the organization, which is now called Virginia Organizing and headquartered in Charlottesville. But it started here in Southwest Virginia.

“What impressed me was all these other organizations started in Richmond or somewhere else,” said Fisher, a professor emeritus of Emory & Henry College. “We started in Lee County, and then in Wytheville. We had affiliates — it wasn’t an attempt to bring everyone in under one roof but through affiliates.”

Today the agency has nine chapters statewide, and members have been involved in everything from simplifying voter registration applications to economics education and dismantling racism. Members have said they’re proud of Virginia Organizing’s bottom-up policy regarding choosing causes to champion — they meet annually to talk about what issues are going on in the local community and make a game plan to address them.

The Southwest Virginia chapter has a few hundred members on its list, and several dozen who stay active, said Brian Johns, the staff member for the local chapter. He said the size of the group fluctuates depending on the work that’s going on at the time.

The local group was heavily involved in protesting hydrofracturing for natural gas in Washington County last year. After Board of Supervisors ultimately approved fracking in the county, Virginia Organizing members and others took it upon themselves to get certified to monitor local water conditions and report them to the Virginia Department of Environmental Quality.

“Virginia is incredibly difficult to organize,” he said. “The fact we’re able to link homeowners in Northern Virginia to coal miners in Southwest Virginia … what’s always impressed me is it’s a relational model. You sit down with someone and share your story. That brings a link and trust, so you feel you’ll be missed if you don’t participate.”

Denise Smith said that that different type of model is important to her. A founding board member, Smith lives in Bland and is still involved.

“It’s about relationships, not membership,” she said. “We try to get people connected to the community and we see the changes, just the little changes. And a lot of little things add up to the big things.”

Jill Carson, of Pennington Gap, was also among the founding members. She has also served as a staff member.

“[Szakos] encouraged us to talk to people, to find concerns about the community,” she said. “We started to build a base of people that had similar concerns in their communities.”

One of the first projects in Lee County was to change jury selection to be more randomized, she said — before then, people of color and poor people weren’t often chosen to serve.

“We’re proud of changing that,” she said.

“It’s kept true to its principals,” he said. “It’s very racially diverse … I guess I got to the point where I never thought I’d see an organization in Virginia be as successful as it’s been. When you get this opportunity, it’s important to stop and assess what it’s done.”

Carson said she’s proud of helping one of the Virginia Organizing members find her voice and get involved.

“I’m most proud of giving a voice to people,” she said. “Getting people involved in the community and getting them to take action, that’s what it’s all about.”