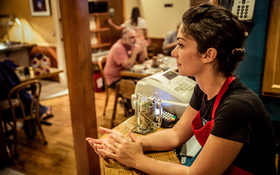 Listen to the audio version of this story at Public News Service.

Va. – Momentum is building to raise the federal minimum wage, and a new analysis shows that working women in Virginia and other states could benefit the most.

Introduced in the U.S. Senate last week, S. 1150 – the Raise the Wage Act –would increase the federal minimum wage to $12 per hour by 2020. The Center for American Progress crunched the numbers, and its director of women’s economic policy, Sarah Jane Glynn, said the center found that 57 percent of those who would receive a raise are working women.

“Women are much more likely to be concentrated in low-wage work than men,” she said, “and oftentimes, these are workers in industries that are heavily female-dominated, like the service industry, food service, retail, child care, sectors like that.”

Glynn said one-third of women workers who would be affected by the increase are mothers. She added that a person working full time at the current minimum wage could earn slightly more than $15,000 a year, below the federal poverty line for a household with any number of children.

“These are adults, these are parents, these are people who are still having to rely on public benefits because they are below the poverty line even though they are working full time,” she said. “That really does highlight the fact that we need to do something. This is an untenable situation.”

According to David Cooper, senior economic analyst for the Economic Policy Institute, Virginia has room to raise the minimum wage without causing economic problems. As of now, the state minimum is the same as the federal minimum, and Cooper said typical low-end wages in Virginia could easily go up without making the state at all unusual.

Opponents of raising the minimum wage argue that it would increase unemployment for lower-skilled workers, but Glynn countered that past increases have raised earnings and reduced poverty without leading to job losses.

The analysis is online at americanprogress.org. The Raise the Wage Act is atcongress.gov.