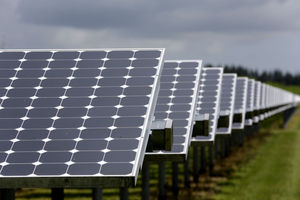 Published in the Times-Dispatch.

Online retailer Amazon announced plans Wednesday to buy energy from what will be Virginia’s largest solar farm in Accomack County.

Amazon Web Services, part of Amazon’s cloud services, will buy the energy from Community Energy Inc. as part of Amazon’s plan announced last year to use renewable energy for all its infrastructure, including its many data centers in Northern Virginia.

That project will involve about 8,000 solar panels on 25 acres, generating enough electricity to power about 500 homes under optimum conditions.

The Accomack County project, known formally as Amazon Solar Farm U.S. East, will use 250,000 solar panels across 900 acres. That would generate enough electricity to power about 15,000 homes in a year.

The energy generated will be put onto the electrical grids that supply current and future Amazon Web Services data centers in the central and eastern U.S., the company said.

Zoning for the project has been approved, and work on the final design is being finished before applying for a building permit, Alderfer said. Once the project is completed, only four or five full-time positions will be required for landscaping around the panels.

The cost of solar technology has come down enough for large companies to consider building huge arrays, Alderfer said.

“Amazon’s new solar project will create good jobs on the Eastern Shore and generate more clean, renewable energy to fuel the new Virginia economy,” Gov. Terry McAuliffe said in a statement. “I look forward to working with Amazon and Accomack to get this project online as we continue our efforts to make Virginia a global leader in the renewable energy sector.”

It has come under pressure recently from customers, including Netflix, which have urged it to move to cleaner energy sources. Amazon said in a release Wednesday that it was a quarter of the way to its goal by April of this year.