Bad Medicine: AHCA provisions would be hard for older adults to swallow

Published by The Commonwealth Institute.

As we wait to hear details about the Senate’s healthcare bill, we can assess the impact that the Affordable Care Act (ACA) has had on people in Virginia, and which groups or communities are likely to experience the greatest changes if a version of the House’s American Health Care Act (AHCA) moves forward. There’s a common denominator among those who are likely to be harmed: they will be the ones who benefited most from the ACA over the past eight years. Older adults, both those in the 55-65 and in the 65+ brackets, will be hit hard by proposed replacements to the ACA.

Over 100,000 older adults in Virginia signed up for health insurance through the ACA Marketplace, and many would no longer be able to afford health insurance if the AHCA is passed. Even those who could still afford coverage, including many who have employer-sponsored insurance, would see their costs go up and their coverage limited. They’d be at risk of losing everything they’ve worked for near the end of their working careers if they are hit with high medical bills. 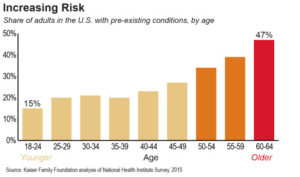 Seniors over age 65, who have likely ended their working careers and so have reduced income at the very time their need for health care services is increasing, would be at risk of receiving lower quality services and of seeing their benefits cut. Once retirement age is reached, almost all seniors receive coverage for a majority of their medical care through Medicare or Medicaid or both – and they both would receive significant cuts under the House-passed AHCA.

Key provisions of the Affordable Care Act benefit older adults, increasing access to care, quality of care, and cost. It isn’t perfect, particularly in states like Virginia where Medicaid has not been expanded. But the proposed “cures” of the American Health Care Act are worse than the supposed ills of the ACA.