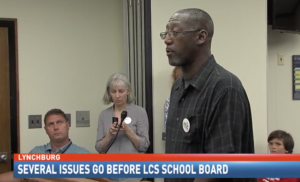 Before the meeting even started, a group called Virginia Organizing met outside to make a push for equality with suspensions.

They claim statistics from the state department of education say children of color are suspended at a much higher rate their white counterparts, and students are not all equally punished for the same infraction.

A representative with the group addressed the concerns in the public comment part of the meeting.

They say they want to have a meeting with the school.

School board chairman, Doctor Michael Nilles says they don’t meet with private groups.
And the school board is working to make Lynchburg City Schools a fair environment for all students.

“They can tell if a teacher genuinely does or doesn’t like them, and that’s some of the things I think the system is dismissing or not paying attention too,” parent Reason Chandler said.

Dr. Nilles said, “My recommendation has been that they meet with the superintendent and they have. We don’t typically meet with private groups or individual groups. There’s a lot of practical issues with that.”

Packed house for the LCS school board meeting. pic.twitter.com/ZyF7FC7NWu

The Lynchburg Educators Association President says they have not had a salary step system in 10 years.

The President says the current raises aren’t in line with the increases in the standard of living, and some staff members are working multiple jobs.

The school board says it would love to increase the salaries.

Their problem is they are not getting enough money from the city to meet the demands the staff wants.

“How great would it be if you had a teacher or a staff member that had that one job to focus on. How much better could we be. We would like to find out,” Lynchburg Education Association President, Karl Loos said.

“They’ve been coming through. There’s a lot more work they’re putting in, but the reality is the compensation is not there for them,” Dr. Nilles said.

The education association hopes to see a strong raise put in place for the 2018-2019 school year.