Bill Would ‘Ban the Box’ on Job Applications 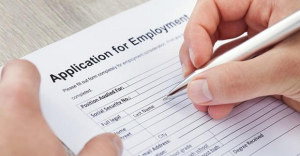 RICHMOND – A Senate committee on Monday narrowly approved a bill that would prohibit state agencies from asking job applicants if they have a criminal history on employment applications.

The Senate General Laws and Technology Committee voted 8-7 in favor of Senate Bill 1017, sponsored by Sen. Rosalyn Dance, D-Petersburg. It would remove the box from applications that prospective employees must check if they’ve been convicted of a crime.

“They get an opportunity to sell themselves on that job, to demonstrate their skills and abilities for that job,” Dance said. “And if it’s an appropriate job, they get to get a job and become an invested citizen paying taxes in the commonwealth.”

She said Richmond and Petersburg – two cities she represents – have already “banned the box” in filling local government jobs.

Oludare Ogunde, president of Resource Information Help for the Disadvantaged, addressed the committee in support of the bill.

Ogunde, who has been incarcerated, said the Virginia Department of Corrections is largely focused on rehabilitation and reentry programs, but these efforts go to waste because prisoners don’t have a real chance of employment when they are released.

“When they come out here, there’s this huge barrier that prevents them from even getting a job,” Ogunde said. “If you have to just mark that box, you’re not even going to get a callback. Nobody is going to want to hear what you have to say.”

“How do we counterbalance on the one hand people saying we need more information before we hire people, and on the other hand saying we need to give people a chance?” Petersen asked.

“I think this bill finds that balance because we’re not saying they would automatically get the job,” Dance said. “It gives them an opportunity to not be frustrated and turned away.”

The bill would allow state agencies to do a criminal background check on the prospective employee after offering them the position.

“First you have to interview that person and see them as the best candidate for the job, and then all this information comes out before you elect to give that person the job,” said Dance, referring to the opportunity for background checks upon a job offer.

State agencies could recant their job offer if a criminal history deems the applicant incompatible with the position.

Moreover, Dance’s bill would not apply to jobs with law-enforcement agencies, fire departments and emergency medical services agencies. Applications for those positions could continue to ask whether the applicant has a criminal history.

Sen. Thomas Garrett, R-Lynchburg, asked whether cities could ban the box without Dance’s bill.
“Localities can choose to do this right now without us, right?” Garrett said.

They can, and many have. Ben Greenberg, legislative coordinator for Virginia Organizing, said 15 localities in the state have undertaken “ban the box” initiatives, including Harrisonburg, Fairfax County, Martinsville and Virginia Beach.

“We’ve been working with localities throughout the state on this matter, and they’ve been very responsive in trying to help remove this box and help people have a fair shot at work,” Greenberg said.

Republican Sen. Jill Holtzman Vogel of Winchester joined the seven Democrats on the committee in voting for SB 1017. The seven other Republicans on the panel opposed the measure. The bill now heads to the Senate floor for consideration.

If approved by the full Senate, the bill would move to the House, where it likely would face opposition. Last week, a companion measure – House Bill 1680, sponsored by Del. Betsy Carr, D-Richmond – died in a subcommittee.

Here is how members of the Senate General Laws and Technology Committee voted Monday on SB 1017.