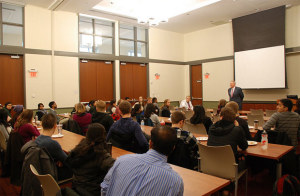 RICHMOND – Virginia’s secretary of health and human services, William A. Hazel, wants legislators to put aside their political differences and ensure that every resident of the commonwealth has access to affordable health care.

Hazel is urging the General Assembly to expand Medicaid, the health coverage program for low-income people, as states are encouraged to do under the federal Affordable Care Act. Hazel made his case again in a recent talk to students at Virginia Commonwealth University Medical Center.

Although the Affordable Care Act made it easier and cheaper for many people to buy health insurance, Hazel said coverage gaps still exist.

“We had about 1 million Virginians who were uninsured in 2010,” he said. “Probably two-thirds of the people who came to a community health center last year to try and get coverage were told, ‘You do not qualify for a benefit in an exchange because you do not make enough money.’ Also, we do not cover single adults. We have all these people at lower incomes who are not eligible.”

That’s why Gov. Terry McAuliffe and other Democrats are pushing for the state to offer Medicaid to about 400,000 more Virginians. Under the Affordable Care Act, states can extend Medicaid to people with incomes up to 133 percent of the federal poverty level. The federal government has promised to pick up most of the cost, which would be about $2 billion annually for Virginia.

“Last year, we made a big effort to get Medicaid expanded … I think the political odds are this year that the House Republicans will not change their position, but I think this is something that we can do,” said Hazel, who was appointed by Republican Gov. Bob McDonnell and reappointed by McAuliffe.

Republican legislators in Virginia oppose Medicaid expansion because the program’s costs have been growing and they fear the state eventually will be stuck with the bills. Republicans blocked several efforts by Democrats in the General Assembly to expand Medicaid in 2014.

Hazel spoke at the VCU Medical Center, just blocks from the state Capitol, as the General Assembly’s 2015 session got underway.

He told students that 18 percent of the U.S. gross domestic product goes toward health care – more than in any other nation. Switzerland has a universal health care system, and only 11.5 percent of its GDP in 2012 was spent on health care.

“How can we justify spending so much more money than Switzerland?” Hazel asked. “They are spending two-thirds of what we are spending, and we have people who are not cared for. I’m asking how that happens.”

Much of the problem, he said, is that many Americans lack health coverage and forgo preventive medical care, such as physical exams and screenings. When they have a dire need, they go to hospital emergency rooms, which must treat everyone regardless of insurance status.

Hazel, an orthopedic surgeon, said he wants to change that: “We’re trying to go from ‘fix it when it’s broken’ – which has been my life’s work – to find out how to invest in healthier people who can be more productive.”

McAuliffe has asked the General Assembly to consider expanding Medicaid when it revises the state budget during the legislative session, which runs through Feb. 28. Republican lawmakers so far have rebuffed that request.

Other Medicaid-related proposals before the assembly include:

HJ 637, by Del. R. Steven Landes, R-Verona. It would authorize a study on how to reduce Medicaid costs and improve patient services. A House subcommittee approved the resolution last week.