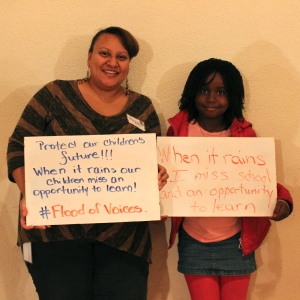 The bill—called the Virginia Alternative Energy and Coastal Protection Act (SB 571/HB 351)—would invest upwards of $75 million per year into energy efficiency programs targeting low- and moderate-income Virginians. This would create the state’s the largest dedicated source of funds to help consumers reduce electricity demand. The funds would come from adding Virginia to a regional, market-based system that caps and reduces carbon emissions, such as the nine-state Regional Greenhouse Gas Initiative.

“Virginians pay the 10th-highest average home electric bills in the nation, largely due to lagging state policies to encourage efficiency,” said Senator Donald McEachin, chief patron of SB 571. “This bill does the most to help our families save money while helping to protect our climate.”

Experts estimate that Virginia would receive more than $250 million per year in new state revenue as power plants pay a fee for their emissions. TheMcEachin-Villanueva bill would direct half of those funds toward flood-protection measures—creating the state’s first dedicated revenue stream for adaptation projects—while investing nearly one-third into energy efficiency programs for renters and homeowners.

“We have a common-sense, bipartisan approach that brings real resources to huge problems facing our state,” said Delegate Ron Villanueva, chief patron of HB 351. “That’s why the Virginia Municipal League, and city councils representing more than one million people across the state are working to pass this bill.”

“Lawmakers in Virginia can help families save money by prioritizing solutions that save energy,” said Zack Miller, Director of Policy at the Virginia Housing Alliance. “This bill will help low- and moderate-income renters and homeowners alike save more of their hard-earned income and live in more comfortable and affordable housing.”

A recent study by researchers at Virginia Tech found that proper energy efficiency improvements would save the average apartment renter $54 per month in heating and cooling costs, or nearly $650 annually. Meanwhile, the American Council for an Energy Efficiency Economy (ACEEE) ranks Virginia in the bottom half of states nationally in policies designed to encourage efficiency.

“When many low-income Virginians spend as much as a quarter of their annual household budget just to heat and cool their homes, it’s high time for action,” added Susan Hill, Executive Director of the Richmond Region Energy Alliance.

The Regional Greenhouse Gas Initiative has a track record of saving consumers money from Maine to Maryland. A recent report by the Analysis Group found that the RGGI program has helped consumers in participating states save a total of $460 million on their utility bills in the last three years alone. Citizens in the RGGI region pay lower average monthly electric bills and use much less energy per household compared to Virginians.

“Virginia should be at the top of the pack, not the bottom, when it comes to helping families save energy,” said K.C. Bleile, Executive Director of EarthCraft Virginia, a statewide non-profit that runs one of the largest regional green building programs in the country. “We see huge environmental and economic benefits from energy efficient housing, and we need state policy to support the rising demand for healthy, efficient homes.”

The bipartisan Virginia Coastal Protection Act is the most comprehensive climate action plan ever introduced in the Virginia General Assembly. It would position Virginia to meet the federal Clean Power Plan while generating hundreds of millions of dollars to invest in statewide solutions. In addition to flood-protection and energy efficiency measures, the bill would fund economic development in the coal regions of Southwest Virginia and solar projects statewide.

A broad and diverse coalition—including the Virginia Municipal League, the city governments of Virginia Beach, Norfolk, Newport News, and Hampton, and environmental, social justice, faith, and consumer advocates—are pushing for its passage.

“City councils, consumer advocates, and citizens hammered by rising seas all agree: now is the time for action,” said Dawone Robinson, Virginia Policy Director at the Chesapeake Climate Action Network. “Virginia must do more to address climate change, and our legislators have a historic, bipartisan opportunity to act right now.”