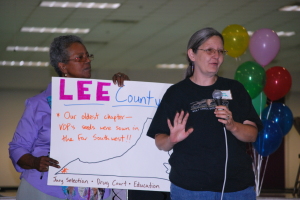 Denise Smith (holding microphone) spoke at the 15th anniversary celebration in 2010 about local victories in Southwest Virginia. Jay Johnson, the State Governing Board Chairperson at the time, held a poster illustration.

This is an excerpt from Building Power, Changing Lives: The Story of Virginia Organizing. Click here to order your copy today!

In the mid-1990s, Denise Smith was living in Southwest Virginia. Through her own life experience, she saw firsthand – being homeless, fighting for her husband’s disability claim, struggling to get student loans for college – that social and economic change was needed in Virginia. When she tried to call for change, she felt ignored by state elected officials and policymakers who didn’t seem to pay attention to people from her part of the state. A professor she knew from her college days, Dr. Steve Fisher, told her about a community organizer named Joe who might have an idea about how to effect real change in Virginia. She decided to hear what he had to say.

Denise met Joe Szakos at McDonald’s in Wytheville, a small town in Southwest Virginia that is closer to the capitals of North Carolina and West Virginia than it is to Richmond. Joe had moved from Eastern Kentucky to Charlottesville, Virginia, so he and his wife could raise their children in a more diverse community. With Joe’s experience as a community organizer and Virginia’s long history of injustice, an idea was born.

“I knew this was something different, something real,” Denise remembers now, “and I wanted to be a part of it.”

Virginia Organizing’s history has grown over the past 20 years in much the same way it began: with grassroots organizers living and working in communities, talking with the people who are most deeply affected by poverty, injustice, racism, classism, sexism, heterosexism, and other forms of oppression. By reaching out to people one by one and building relationships, Virginia Organizing starts with the assumption that people with real lived experiences are the experts of their own circumstances.

That was the goal in that first meeting with Denise – to learn from her about her life in Bland County and to see if she was interested in changing her community and state. When Denise and Joe met, she told him she was tired of “legislators pretending Virginia ends at Roanoke.” While there were organizations doing good work in Southwest Virginia at the time, no one was consciously organizing people to build power and create long-term change. Denise tells everyone who will listen that she really did not know what she was getting into:

When we began the Virginia Organizing Project, there were all these different people who did not know each other. From the very beginning, VOP included people from all across Virginia, of all races, genders, ages, sexual orientations, faiths, political parties, and abilities coming together to figure out how to create a statewide organization to change what we all agreed needed to be changed in Virginia. Joe Szakos brought us all together and helped us to start building relationships in our communities so we could create this statewide organization. He had every single one of us attending Dismantling Racism workshops, attending meetings together in different locations, and breaking down barriers with each other before we worked on breaking down barriers in the state. Each one of us came to it at a different time in our lives and with a different view, really.

I had never championed LGBT issues or race issues – I had never done community organizing like this! Even though I am a heterosexual white woman, I, and the rest of the Organizing Committee, understood that those issues were critical if we wanted to build what we really wanted – even if it looked a little radical at the time. I learned from meeting all these different people that the problems and issues across the state are so similar and affect all of us.

I eventually found myself sending letters to the editor, meeting legislators, and writing to policymakers about issues affecting people and communities not my own but all over the state. Because even though our communities are separate on the state map, we have a common need to see Virginia succeed for all of us, and for those in power to represent all of us.

It’s different when you get to know people who are directly affected. The Virginia Organizing Project was a unique and new way to start creating change in our state by bringing diverse people to the table. It was – and still is – different, and it works.

Virginia Organizing has been able to address problems where people live and where change can have lasting consequences. Certainly in 1995 there were issues that needed to be addressed in other parts of the Commonwealth, but it was clear that Southwest Virginians were largely ignored and needed a catalyst for raising their collective voice and taking action on the issues unique to people of the area. This commitment to people who are traditionally silenced shows a belief in the value of all people, no matter how far away from the state capital they may live, or how economically challenged the area may be. People of color, people with disabilities, people who identify as gay, lesbian, bisexual, transsexual, or genderqueer, people with lower incomes, and others are all empowered to take action on issues that matter to them in a way that honors their dignity and respects their individual and collective voices. These are the people who make up Virginia Organizing. Virginia Organizing works hard not to speak for anyone, and avoids being labeled as an “advocacy group” that works on behalf of others. Instead, Virginia Organizing works alongside individuals to amplify individual and community voices and work together for change.

Staying True to Its Roots

While the organization has worked on some state and national issue campaigns as it grew, Virginia Organizing has never lost touch with its original roots – real people raising their voices and taking action to create real change in their communities. In 2014, when the political climate in the Virginia legislature and Congress was very divisive and not as ripe for policy change, Virginia Organizing shifted to a more concentrated focus on local and non-legislative issues. This shift resulted in more victories and new energy – two important components of grassroots community organizing. The focus on local campaigns and leadership development increased the depth of work that could make a big difference in the lives of people directly affected in the here and now.

The national and state legislative work remained an important, albeit smaller, component of the organization as Virginia Organizing became more deliberate about which campaigns to undertake. When the U.S. House of Representatives leadership refused to allow a vote on an immigration bill that included a path to citizenship and would have likely passed a House floor vote, State Governing Board members and other Chapter leaders were arrested in solidarity with immigrant youth in Washington, D.C., calling for reform in the legislative process. At the state level, pushing for expansion of Medicaid under the Affordable Care Act, Virginia Organizing Chapters amped up the pressure on Virginia state senators and delegates in their home districts by holding vigils and community forums, encouraging local people to submit their opinions to editors of newspapers, making visits to legislators’ offices, and more. The Fredericksburg Chapter even delivered a homemade coffin to Speaker of the Virginia House of Delegates William Howell’s district office to symbolize the people who would die that year in Virginia without Medicaid expansion.

It is 2015 as this history goes to press, and Denise Smith is still working toward the change she envisioned in that meeting 20 years ago. In 2012, she had to resign from her job due to severe medical problems. Although she was able to get disability benefits, she continues to be concerned about health care because members of her family are not getting the medical attention they need due to Virginia’s failure to expand Medicaid. She is also passionate about protecting Virginia’s natural resources, increasing diversity in elected leadership, and expanding voting rights and access. Denise, like other long-time Virginia Organizing leaders and supporters, understands that sustainable long-term change takes time to accomplish. It is slow, it is incremental, but it is lasting.

When long-term change feels far away, it can be tempting to start looking for shortcuts and quick fixes. Denise’s experience has convinced her that in order for change to last beyond one rally, one piece of legislation, one generation, the organization must build a base of leaders willing to work together through thick and thin. Virginia Organizing remains committed to the communities and the constituencies who have been ignored or dismissed by those in power. The organization has extended its reach to all corners of Virginia: from Virginia Beach to Harrisonburg, Fredericksburg to Danville, Petersburg to Pennington Gap, and all points in between. New chapters are being organized each year. The staff has grown to 20, with 13 full-time community organizers and plans for more in the coming years.

Virginia Organizing will keep working until all voices are heard and Virginia is a fair, equitable, and just place for all people. This 20-year history tells the story of how Virginia Organizing has made progress toward that goal and how we plan to build on this work to create an even stronger future.

Denise Smith and the other leaders who have become part of Virginia Organizing are real people, working for real change in their communities. In Virginia, that’s a big deal.