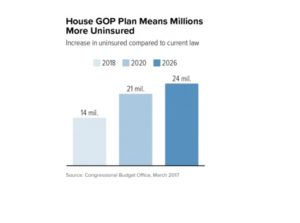 The Congressional Budget Office report indicates that the American Health Care Act could prompt another health-insurance crisis in the U.S. (Center on Budget and Policy Priorities)

RICHMOND, Va. – Despite repeated promises that the replacement for Obamacare would be better, groups digging into the official projections say they show the replacement legislation puts the country back where it was before reform.

According to the Congressional Budget Office, the GOP plan to replace the Affordable Care Act means about 14 million people would lose health coverage next year.

Edwin Park, vice president for health policy at the Center on Budget and Policy Priorities, says eventually, the healthcare system would revert to the crisis situation that the ACA reforms addressed.

“For all promises about replacement, the House bill results in very large coverage losses, and all the progress we made in the number and percentage of people who don’t have health coverage, would be lost,” he explained.

Republicans point to other CBO projections that the replacement plan would reduce the budget deficit. Park points out that most of the savings comes from shifting Medicaid costs onto the states. He adds the very wealthy and some big healthcare corporations would see huge tax cuts.

Speaker of the House Paul Ryan says many of those who would lose coverage in the first few years would be folks who decide they don’t need insurance when the individual mandate is repealed. But Park says what’s more likely to happen is premiums would rise, and subsidies that help people pay them would fall. Soon, he predicts, many Americans simply couldn’t afford health coverage.

“CBO finds that premiums are going to rise in 2018-2019 by 15 to 20 percent, making coverage unaffordable for some people who’d otherwise get health insurance under the current rules,” he added.

Health and Human Services Secretary Tom Price has long argued that under the ACA, the market for individual insurance was in a “death-spiral” that has to be stopped. But Park believes the replacement plan badly undermines those markets long-term.

He says by comparison, CBO found that under current law, those markets are stable and growing.

“Despite the claims the private insurance market is heading to a ‘death-spiral,’ there’s no evidence of that,” he said. “In fact, enrollment has continued to grow.”

Republicans note that insurers have pulled out of some less-profitable markets. Despite opposition from hospitals, the American Medical Association and AARP, GOP leaders in Congress hope to pass their ACA replacement quickly.