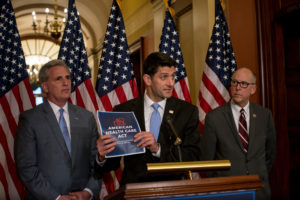 Published by The New York Times

WASHINGTON — The House Republican plan to repeal and replace the Affordable Care Act would cause 24 million people to lose health insurance within a decade, the nonpartisan Congressional Budget Office said on Monday.

Republicans had been bracing for what was almost certain to be a bleak accounting of the legislation’s projected effects. The American Health Care Act, as Republicans call their bill, was already facing widespread criticism from providers of health care, some conservatives, and a united Democratic Party. The numbers released Monday will only make it more difficult for Republicans to explain why their legislation would bring positive change to the country’s health care system.

In recent days, Democrats had criticized Republicans for pushing the health care bill through two House committees last week before the Congressional Budget Office had weighed in, saying it was irresponsible to begin considering legislation without a firm grip on its potential costs and ramifications.

“Republicans are racing their disastrous health bill forward before the C.B.O. can expose its consequences to the American people, but they can’t hide from the facts forever,” the House Democratic leader, Representative Nancy Pelosi of California, said last week.

The C.B.O. produces a variety of budget and economic analyses, including deficit projections, legislative options for lawmakers confronting the nation’s most vexing problems, and cost estimates for legislation. Its director, Keith Hall, was appointed in 2015 by congressional Republicans, and it has maintained respect for its objective analysis.

But with an unfavorable analysis expected, Republicans from the White House to Capitol Hill began to undermine the credibility of the budget office’s numbers last week and kept it up through the weekend.

“If the C.B.O. was right about Obamacare to begin with, there’d be 8 million more people on Obamacare today than there actually are,” President Trump’s budget director, Mick Mulvaney, said Sunday on ABC’s “This Week.” He added, “Sometimes we ask them to do stuff they’re not capable of doing.”

The number of people who have signed up for insurance through the health law’s exchanges is lower than expected, in part because employers did not drop coverage to the extent that had been anticipated. In addition, the Supreme Court ruled that states could not be compelled to expand Medicaid — and many Republican-led states opted not to do so.

The House Republican legislation, which was released last week, would repeal major parts of President Barack Obama’s health care law. It would scrap the income-based tax credits that helped people pay for coverage, end the penalty for people who do not have health insurance and phase out the expansion of Medicaid that has brought coverage to millions of people.