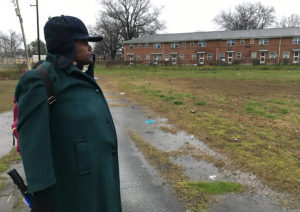 (Michelle Cook stands on the path children from Tidewater Gardens take to get to school. It frequently floods during storms. Credit: Nicholas Kusnetz/ICN)

In this article from Inside Climate News, activists and city planners in Norfolk discuss the damage sea level rise is doing to the city:

“Climate change, sinking land and changing ocean currents have turned Norfolk into a case study on the vulnerability of coastal cities to flooding in a warming world. Over the past two decades, the city has experienced twice as many days of tidal flooding as it had in the previous three decades. At the same time, a warming climate has brought more frequent heavy downpours.”

They also discuss the questions residents in public housing developments such as Tidewater Gardens have about the city’s plans to tear down their homes without replacing them:

“But at the same time, Norfolk is discovering the limits of how quickly it can change. In Tidewater Gardens, the city’s plan—replacing the development with a mixed-income neighborhood while ceding low-lying spots to open space—has residents and housing advocates fearing it will really amount to city-supported gentrification.”