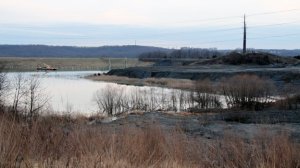 Pond D at Dominion’s Possum Point power station. The power company plans to treat the water and discharge it into Quantico Creek. The coal ash will be buried and permanently sealed on-site. Photo by Patrick Madden | WAMU

RICHMOND, Va. -As Congress debates the issue, utilities and communities in southeastern states, not including Virginia, are moving ahead with clean up of millions of tons of coal ash in impoundments at power plants.

Until recently, Congress had been deadlocked regarding this legacy of a coal-powered century. In the meantime, groups like the Southern Environmental Law Center have pushed utilities in southern coastal states to take the waste from the big storage ponds and bury it in dry, lined landfills.

Frank Holleman, senior attorney with the center, said cleanup projects are happening across Georgia and North and South Carolina.

“We’re moving toward a recognition by communities and utilities that this unlined storage of ash in earthen pits next to waterways just is not a good idea long term,” Holleman said.

Coal ash ponds can leak arsenic, lead, heavy metals and mercury into the waterways where power plants are typically located. Some members of Congress have argued that the coal ash is not that hazardous and should not be treated like hazardous waste. In Virginia, Dominion wants to keep its coal ash where it is, drain and cap the waste ponds.

There are now some signs of motion on the issue at the federal level. The EPA has imposed what Holleman called minimal storage standards and effluent limits. But the senate is considering language that critics charge could undermine those standards.

In the House, West Virginia Congressman David McKinley has proposed legislation he said would increase recycling of the waste. But Holleman said recycling is already happening.

“So you don’t need a new law from politicians in Washington,” Holleman said. “Instead, what the proposed legislation’s trying to do is weaken the new minimum rules that EPA has put into place.”

He said some drinking water sources in South Carolina are seeing 60 to 90 percent reductions in the levels of certain pollutants. The cleanup is especially important near the coast, given sea-level rise from climate change.

Holleman said utilities across the southern coast are committing to cleanup.

“Except for one,” he said. “There’s one utility, and that’s Dominion at its Chesapeake site, who wants to leave this ash next to a river in the coastal plain.”

The center has sued Dominion over the future of the Chesapeake coal ash and now is awaiting a decision from the judge in that case.