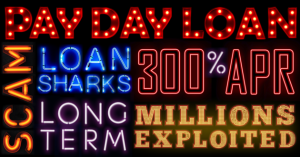 On Thursday, June 2, the Consumer Financial Protection Bureau (CFPB) released proposed rules for payday and title lending with the intent to curb predatory practices by these lenders. The proposed rules are a good start, but unfortunately, the payday and car title lending companies successfully lobbied for exceptions to the rules that will allow these companies to continue to operate business as usual.

Virginia Organizing released a statement shortly after the rules were proposed. Chairperson Del McWhorter said, “Today, we are glad that the Consumer Financial Protection Bureau is taking some bold steps to regulate some of the worst practices in the industry. The proposed rules are a great start, but we are concerned about predatory lenders exploiting loopholes.”

One of the protections proposed by the CFPB is basic underwriting criteria to ensure that consumers can reasonably pay back their loan according to the loan terms.

Debt traps exist because individuals take out a $300 payday loan and pay a total of $369.20 according to the loan calculator for a two-week loan of a leading payday lender in Virginia. This is an annual percentage rate (APR) of 601.38 percent. The full $369.20 is due usually within 14 days. When payday comes, the lender drafts the consumer’s account for the full amount of the loan. If rent or a car payment is due, the consumer then has to take out another loan for $370 or more to cover those costs.

The cycle continues until the individual has exhausted the number of loans they can take out. If the debt is outstanding, they are then sent to debt collectors who often employ hostile tactics to threaten and intimidate borrowers.

The CFPB’s proposed rules would disrupt this cycle — with some notable loopholes. If the rules are adopted as is, the underwriting criteria only applies to a a person who has had more than six loans without an assessment of the ability to repay. Essentially, predatory lenders can trap people in debt cycles without any of the underwriting criteria, just as long as they don’t try to lend them a seventh loan. Six predatory loans are six too many.

One of the positive provisions in the proposed rules would take away the ability of a lender to draft an individual’s bank account more than twice without written permission. This should protect individuals from racking up a significant number of bank fees — each time an attempt is made, banks can charge a $29 fee if funds are not available.

Virginia Organizing supports strong regulations on predatory loans. The CFPB will receive comments through September 14 about the proposed rules. We are asking that they implement the rules and close the loopholes that will make it easier for lenders to exploit consumers. You can write comments at http://bit.ly/stoppredators.