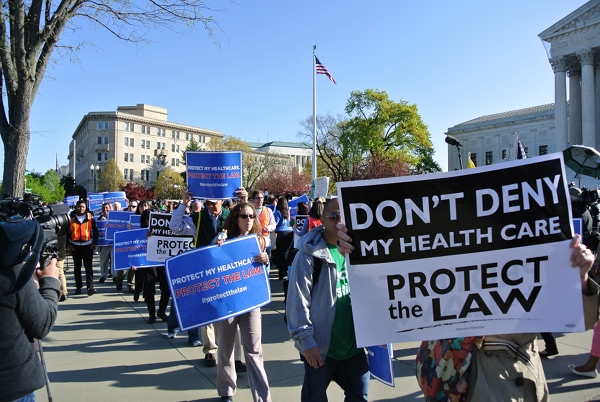 During the two years Health Care for America Now (HCAN) campaigned to win health care reform, and in the two years since, we've never organized a "mandate" rally. Political opponents of the law insist that the mandate is the "heart" of the law, but it's not. The heart of the Affordable Care Act (ACA) is the expansion of coverage to more than 30 million people and the elimination of the worst insurance company abuses.

Proponents of the law have said a lot about the mandate, and there are good reasons for that. The law will work best if everyone has insurance, and the mandate is one of the best ways to ensure everyone is covered. If more people have insurance, insurance becomes cheaper and better for everyone.

But the mandate is not the only way to achieve affordable coverage with strong consumer protections (for example, see here). The mandate is a tool, a mechanism, a means to an end – not the end itself. The extreme things that have been said about the mandate have been overblown. Groups like the Koch Brothers-backed Americans for Prosperity mislead the American people and use the mandate as a ruse to obscure the dozens of ways the law helps millions of Americans.

I expect the court to uphold the entire law because the ACA is constitutional, and to do otherwise would impose a massive judicial intervention that would harm millions of individuals and businesses benefiting from the law.

But if the court invalidates only the mandate, it won't stop the law in its tracks. The justices will have upheld every single consumer protection, benefit and coverage expansion, including the ban on discrimination against the sick. That's a big deal – the biggest domestic policy change since Medicare and Medicaid.

If the mandate is struck, we will hear that the sky is falling and that the insurance market will crash any moment. The loudest voices will be the insurance companies and congressional Republicans – those who never supported President Obama or his effort to fix our broken health care system. We'll hear from groups like lobbyist-funded FreedomWorks that want to roll back the clock to the days when insurance companies could jack up our rates and deny our care at will. They want to put consumers at the mercy of insurance companies. These are the big corporate special interests that fuel the campaigns of the GOP. They're also the people who lie about the law everyday to seek political advantage in the 2012 election.

Why won't the sky fall? For starters, the mandate is not scheduled to take effect until 2014. So the next Congress has plenty of time to enact an alternative that would encourage broad participation in the insurance market. There is a long list of options, from tax credits to enrollment periods and more.

But changes to the law may not be necessary. The ACA has lots of built-in incentives that can help achieve the goals of the mandate. The most important are the premium subsidies, which allow millions of working and middle-class families to purchase affordable insurance. People don't go without insurance because they don't want it but because they can't afford it. The ACA's subsidies will change that.

We already have 3.1 million adult children getting coverage by staying on a parent's plan. When young adults turn 26, most will have coverage through an employer. For those who do not, the subsidies will make coverage affordable. After enjoying coverage in their parents' plans, they're not likely to suddenly feel reckless and invincible. Instead they'll be inclined to remain insured on their own.

Another rule, known as modified community rating, also helps to stabilize premiums by spreading the risk more broadly. Coupled with the subsidies, this will keep young, healthy people in the insurance market.

The health insurance industry has threatened double-digit rate increases if the mandate is removed. Several recent reports dispute that such increases would be justified. Thankfully, rates in the employer-sponsored group market, which includes 90% of privately insured Americans, shouldn't be affected.

The mandate makes good sense, and losing it would certainly have an impact.

However, if the Supreme Court strikes down the prohibition on discrimination against people with pre-existing conditions like diabetes, high blood pressure and cancer, those people would be devastated. Starting in 2014, the law will stop 129 million people with chronic conditions from being overcharged or denied coverage. It will guarantee that no one will be denied health care for being sick.

We'll find out the fate of the law on Thursday, but we already know what the GOP will do. The fight over the ACA is central to the Republican assault on the health and financial security of seniors, small businesses and hard-working families. The assault includes the GOP's non-stop campaign to end Medicare as we know it and dismantle Medicaid, which cares for children, people with disabilities and seniors in nursing homes.

Medicare, Medicaid and Social Security have always been key to the survival and expansion of America's middle class. Obamacare is bridging the gaps in the protections those programs provide.

Soon we'll know whether the Roberts corporate court will use the ACA decision to side with consumers and small businesses or bow to big corporations and the Republican Party.

A nation is watching and waiting.