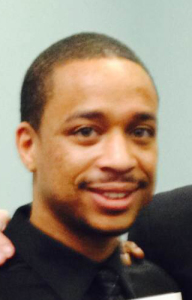 Davon Miller got active with Virginia Organizing after a Charlottesville Chapter leader asked him to register to vote and he was unable to since his rights had been taken away. He decided that he wanted to help other people get their right to vote back so he began volunteering.

Davon went to his first Chapter meeting, which helped him understand the importance of voting. He then went to Richmond with a group to meet with the Secretary of the Commonwealth to discuss the restoration of civil rights process for formerly incarcerated people. After that meeting, the Secretary’s office implemented some positive changes, including shortening the thirteen page application to one page.

In addition to getting his own rights back and registering to vote, Davon has helped others do the same. He has knocked on doors to register voters in his community, but he also uses social media platforms like Facebook and Instagram to encourage and help others through the process. Davon believes civic engagement is incredibly important.

He is also thankful to Virginia Organizing for the focus on leadership development. “What I like about Virginia Organizing is that we work hard to be in tune with the community,” said Davon. “We are teaching people how to take action on issues that are really important to them. When I first got involved, other Chapter leaders took the time to make sure I knew how and why we act, not just what to do.”

Thank you, Davon, for getting active in your community and making a difference!