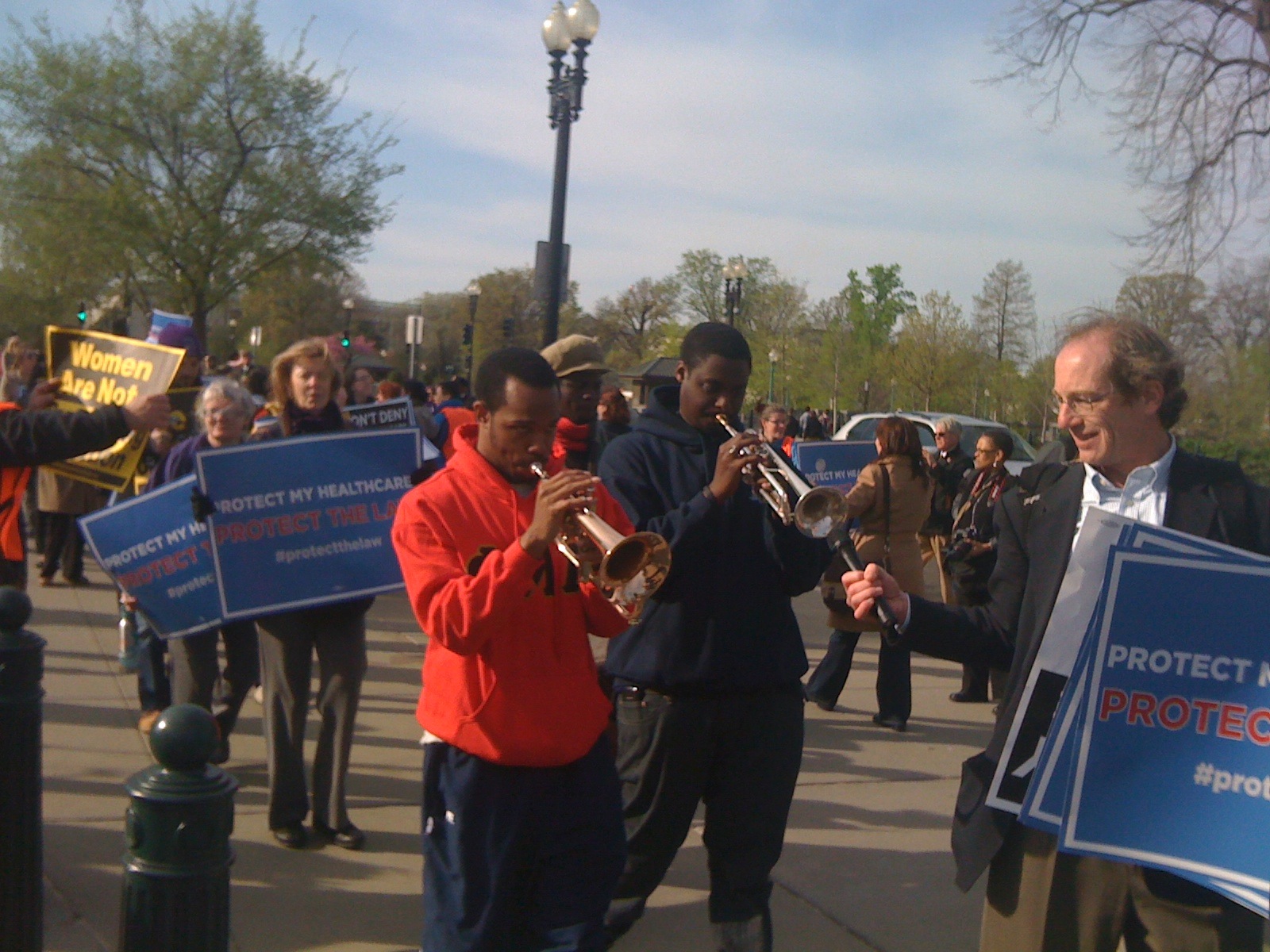 A school teacher, two state lawmakers, families with relatives who depend on Medicaid and a physician leader all spoke out about the many ways they and people who rely on them are helped by the law.

Eric and Linda Christenson of Arlington spoke out in on their experience with Medicaid. The Christensons became temporary legal guardians of their 14-year-old granddaughter after the girl’s parents lost their jobs and were unable to care for her. The Christensons’ health plan would not allow them to cover their granddaughter. Fortunately the family was able to get the help she needed through Medicaid, and today she is thriving as a high-school sophomore. “We are a middle class family and would never have guessed that we could ever need Medicaid. But we are grateful beyond words that is was there when we needed it,” said Linda Christenson in front of a crowd of supporters at the stairs leading to the Supreme Court.

“Surely all faiths would want Congress to heed St. Matthew’s words to ‘look after the sick’ and not to turn away. We can only hope that the Supreme Court and Congress heed these words and preserve life and health for all Americans by protecting the Affordable Care Act so that families like ours never have to watch our loved ones suffer,” added Linda’s husband Eric Christenson.

Theodore Method, a military veteran and retired postal worker from Alexandria, shared his story on how Medicaid has helped his wife who has Alzheimer’s disease, high blood pressure, diabetes and congestive heart failure. Theodore is very involved in his wife’s care and goes to the nursing home down the road in Mt. Vernon to feed her lunch every day. If his wife’s Medicaid benefits were cut, Theodore would have to exhaust his own retirement funds to maintain his wife’s standard of care and would quickly run out of resources for both of them.

“At 80, I can’t provide the type of care my wife receives at Mt. Vernon and without Medicaid there would be no way to pay for it.  I’ve retired from three jobs at this point, but my Social Security and retirement benefits together wouldn’t be enough to cover the cost of nursing home care for my wife.  If we lost Medicaid, the impact on our family would be devastating,” said Method.

Although Virginia was recently touted as the number one state to earn a living, it has the shameful distinction of being 48th in Medicaid spending. Medicaid is frequently on the state budget chopping block, sustaining millions in budget cuts. We think that Medicaid should be there for Linda, Eric and Theodore and for generations of Virginians to come. Please join us in protecting the health care law by writing a letter to the editor.

Click here to write a letter to the editor to show your support for the Affordable Care Act.

To learn more about implementation of the Affordable Care Act and to hear how the Supreme Court decision will impact Virginia, join the webinar tomorrow sponsored by Virginia Organizing, The Commonwealth Instituate and the Virginia Poverty Law Center.