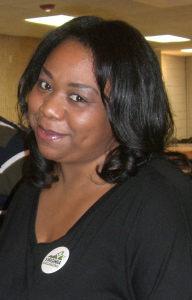 When Ebony Guy first moved to Danville, she was looking for community and a way to make a difference. Through Virginia Organizing, she has made real change in real people’s lives!

Most recently, Ebony served as a leader in the Danville Chapter’s #BlackLivesMatter discriminatory policing campaign. In 2014, following widespread violence and killings by police officers across the country, Ebony co-facilitated a series of community gatherings to plan a response. The campaign has resulted in improvements in accountability between law enforcement and the community, announced in December at a joint press conference with the Danville Police Department.

“The importance of this work will be its impact on future generations,” said Ebony. “In Danville, Virginia Organizing’s work with local law enforcement will have a positive effect on community relations for years to come.”

According to Ebony, it is not only the victories that make Virginia Organizing special—it’s also about the relationships.

“Above all, Virginia Organizing gave me a better sense of community. Getting to know people in my community and different aspects of my city is what I’m proud of.”

“Virginia Organizing works on issues that will either affect you personally or someone you know,” she said. “And those issues will affect people you may never meet.”

Thank you, Ebony, for your great work in the community!