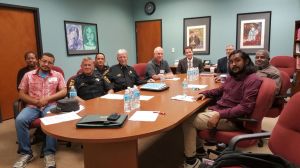 THE REPORT presented a disconcerting situation. Virginia, more than any other state, turns students with disciplinary issues in school over to police rather than handling the situations administratively within the school system.

In an analysis of U.S. Department of Education data, the Center for Public Integrity study gave Virginia that dubious No. 1 distinction—that its rate of nearly 16 referrals per 1,000 children not only led the nation but also was three times the national average.

It was an eye-opening report, because the spring 2015 study found that referring kids to the police sets them on a dismal track of being away from school and being labeled—stigmatized—as a troublemaker. People took notice.

Those people included Fredericksburg-area resident Bryn Pavek, who learned after reading the report that students of color and students with disabilities were referred to police at a disproportionately higher rate than their percentage of the overall student population. That made a bad situation look even worse.

The report refers to the “school-to-prison pipeline,” and acknowledges that for those swept into the pipeline, a bright future becomes dimmer than it might otherwise be.

Pavek turned to Virginia Organizing, a statewide advocacy group with a Fredericksburg-area chapter. Focusing on the issue in Spotsylvania County schools, Pavek and the organization worked with school officials and the Spotsylvania Sheriff’s Office on a new memorandum of understanding. It’s the document that describes the arrangement between the schools and their School Resource Officers, and the SROs’ responsibilities.

They found the existing MOU to be inadequate in defining the SROs’ role. While state officials say they’ll provide a model memorandum for school districts to use, it will be up to local officials to fine-tune it for their own use. In the meantime, thanks to Pavek, Virginia Organizing, School Superintendent Scott Baker and Sheriff Roger Harris, Spotsylvania is coming up with a model of its own.

The draft MOU, which is awaiting School Board approval, will, among other things, establish a job description for SROs and better define the circumstances under which a disciplinary issue rises to the level of overall school safety and security. That’s when law enforcement involvement kicks in.

The point here is that schools avoid using law enforcement as a crutch to solve discipline problems that really could be dealt with in-school. The alternative concept is “restorative justice,” which provides misbehaving students the opportunity to take responsibility for their actions by expressing remorse and contrition.

Make no mistake, gauging student behavior is hard to do, and school administrators could overreact when they’re responsible for a school full of children. Hopefully, even then police would be able to diffuse most situations and leave the student in administrators’ hands.

It was only about a month after the school-to-prison study was released that another study, this one by the Center for Public Integrity’s JustChildren program, looked at the implications of the large number of out-of-school suspensions in Virginia.

It found that during the 2014–15 school year, Virginia schools issued over 126,000 out-of-school suspensions to approximately 70,000 students. It cited a surprisingly high suspension rate for pre-K and elementary-age students, a questionable threshold of misbehavior warranting suspension and, again, a disproportionately large number of minority students and those with disabilities being affected.

The suspensions also mean students are away from school, and likely to get into more trouble in the future. If there is a way to keep more of these students in school, then let’s pursue it.

Certainly, there is real-world exasperation for school administrators who need more options for dealing with problem students, not fewer. People need to empathize with that.

Right on cue, Optimal Health Enterprise has announced a Restorative Justice Training Workshop that it will hold at the Central Rappahannock Regional Library’s England Run branch in Stafford County. School district staff, administrators, teachers and central office staff are invited. The workshop will be held Thursday from 6:30 to 8:30 p.m.

We would urge more localities to take the Spotsylvania example of broader community involvement and communication to heart, and apply it close to home. It will not succeed in every case, but the more students for whom discipline does not include removal from school, the better.