Federal Pipeline Agency Criticized for Being Too Close to Industry 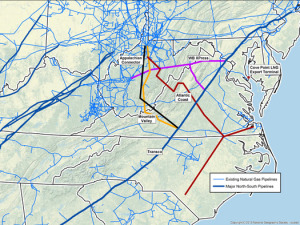 Va. — A spate of proposed gas pipeline projects have drawn sharp criticism from advocates who say the federal permitting agency has a built-in bias toward the industry. Last week, nearly 70 people from almost a dozen states testified at what organizers called a People’s Hearing, aimed at documenting bias and problems at the Federal Energy Regulatory Commission.Delaware Riverkeeper Maya van Rossum said FERC almost always sides with the industry over citizens and the environment – in part, she argued, because more and larger pipelines add to the fees that fund the agency’s budget.“[Fees] increased the more pipeline projects that are approved and the greater the volume of gas that’s approved to pass through them,” van Rossum said. “Throughout the 30 years that FERC has been funded in this way, it only rejected one pipeline project.”The industry and agency claim many of the proposed pipelines are being driven by pressure to get the large volume of new Marcellus and Utica gas to market. But Van Rossum said Congress should investigate.By law, FERC permits pipelines that can demonstrate a public need. And it allows those companies to make a 14 percent guaranteed profit. Like other agencies of its kind, FERC often relies on the specialized expertise of individuals from the industry. Van Rossum said over time, staff, consultants and even FERC commissioners move back and forth though what she called “a revolving door” between the regulators and the regulated. She said the situation results in a clear conflict of interest.“In the case of one commissioner, he was reviewing and approving a pipeline project for the company where his wife worked,” van Rossum said.Half a dozen separate pipeline projects are currently seeking approval to carry Marcellus and Utica gas to Virginia and the Carolinas – in spite of one study that found gas supplies are adequate through 2030. One problem, Van Rossum said, is that companies will sometimes justify the need for the pipeline by showing contracts to sell gas from one branch of the corporation to another.“The customer for the pipeline company delivering the gas is actually – in total or in part – the pipeline company itself,” she said.Van Rossum argued that FERC has become a “rogue agency” that has been “captured” by industry – an especially problematic relationship in light of the agency’s power to grant eminent domain. She believes Congress should rein it in.