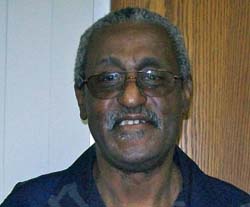 One afternoon Ernest Williams received a knock on his door from organizer Nik Belanger. Nik asked him about the issues he cared about and Ernest resoundingly said jobs. As a longtime resident of Danville, Ernest has seen the city booming and has also seen a decline due to the loss of manufacturing jobs in the area. Ernest put in 40 years driving a tractor-trailer and has seen much of the country. His perspective is defined by his experience traveling the open road but even more so by what he sees when he walks out his front door.

Ernest has seen many people unemployed locally and notes the disastrous domino effect joblessness can have on an entire community. That is what motivated Ernest to open his door to VOP and get involved with the campaign for the Local Jobs for America Act. Ernest has been highly active in the campaign and has addressed City Council, had an op-ed published and has worked tirelessly to bring attention to the need for jobs. “I work with VOP because it gets to the heart of things and gets in the trenches,” said Williams. “We can be the voice for people who cannot speak for themselves. Because someone has to speak up or else they will ignore us.”