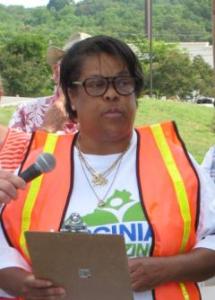 “These are personal issues for me, not just political ones,” said Eunice.

While Eunice was working on criminal justice and health care issues, she noticed that Chapter members who did not have a personal connection to those issues worked alongside her. She chose to help out with immigration reform because others helped her on her issues and then someone shared why immigration reform was so important.

“After I heard the story, I knew I wanted to help. I decided I would get arrested with Virginia Organizing and immigrant youth to show solidarity.”

Eunice did get arrested outside of Speaker of the U.S. House of Representatives John Boehner’s office in Washington. D.C.

“I was prepared for the handcuffs, prepared for the processing, but I was not prepared of how I would feel once the door to the cell shut,” said Eunice. “I knew the outcome of my arrest, but it hit me that there were thousands of immigrants out there being detained for deportation who do not know their fate. They are taken from their homes to a cell filled with uncertainty. That was hard.”

Thank you, Eunice, for your incredible work and commitment to a just Virginia.