Home » The Issues » Civic Engagement » Exercising Our Rights Beyond the Polls

Exercising Our Rights Beyond the Polls 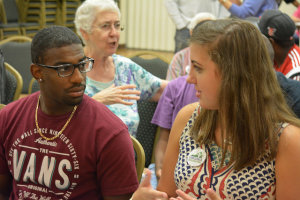 On Tuesday, November 8, Americans voted and elected a new President and other federal and local officials. After the results of the election became clear, many people reached out to organizations like Virginia Organizing, Chesapeake Climate Action Network, and the ACLU to find out how to protect their civil rights and how to work for a more just nation.

There was good news in Virginia from the recent election: The “Right to Work” proposed constitutional amendment failed. This was thanks to the hard work of many groups in Virginia under the leadership of the Virginia AFL-CIO.

In the aftermath of the election, Virginia Organizing was contacted by hundreds of Virginians wanting to know how they could get involved and work to ensure the social, racial, economic, and environmental justice of all people.

As a non-partisan organization, Virginia Organizing is committed to working for justice no matter who is elected into any office. We recognize that many people are frightened and that we have a lot of work to do to stop bad policies and agendas from undoing the hard-fought gains we’ve made in the past.

Virginia Organizing believes the most important thing that individuals can do right now is to organize and build strategic power to build a better Virginia for people of all religions, races, ethnicities, national origins, sexualities, genders, abilities, ages, and incomes. We believe there is a place for every person.

We want to make sure that all our supporters know that there are actions you can take every week that will show the power of Virginians who care about important issues like health care, the environment, ending predatory lending, women’s issues, protecting and expanding Social Security, anti-discrimination, civic engagement, immigration reform, fair tax reform, criminal justice reform, and more.

Each week, we will update our Act Now page on our website, which can be found at http://www.virginia-organizing.org/act-now, with new, concrete actions you can take. We know from experience (and from Congressional staff) that phone calls and personal letters gain more attention than form letters and petitions. That’s not to say we won’t use petitions and letters as well, but we will focus on what will build the most power and show our elected officials that we care.

You can choose to take one action or more than one action. This week, we are asking that you consider joining a Chapter, that you contact U.S. Senators Mark Warner and Tim Kaine and ask them to support health care coverage for all Americans, and contact Virginia Secretary of Education Deidre Trent to ask her to do what’s in her power to reduce school suspensions.

We know that we can make change because we’ve seen the power of organizing in everything we do. People, united for a cause, are very powerful. We have that power and we will exercise our rights to organize and raise our voices.