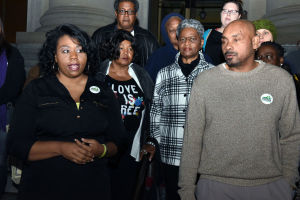 Standing on the steps of City Hall, members of Virginia Organizing announced the progress they are making in an ongoing conversation with Danville police on accountability and transparency.

In August, Danville police officers began raising the hoods of their patrol cars to alleviate a “continual heating issue” Broadfoot told the Register & Bee in September.

Raising the hoods was meant to be a “temporary remedy for heat damage to electronic components in police cars that occurred during extreme heat,” according to a Danville police news release.

There was a “perception issue” with the raised hoods, said Johnny Mayo, member of the Danville chapter of Virginia Organizing.

“Our concern was the [dashboard] camera being blocked” while the hoods were up, Mayo said.

Danville police said the hoods were up while the cars were sitting idle as the officer wrote report or talked to residents.

Once a picture of the raised hoods was shared on social media, people mistakenly thought the hoods were raised during traffic stops.

Police vehemently denied such a practice ever occurred. In September, the practice of raising hoods on patrol cars was stopped.

From April to September, the cost of repairs to patrol cars from heat damage exceeded more than $19,000, according to a Freedom of Information Act request from the Register & Bee.

“Their concern was the cost to the vehicles … the citizens were [saying] the cameras were blocked,” Mayo said.

Monday evening’s meeting was “part of an ongoing conversation that we’ve been having for three years” with Danville police asking for “more accountability,” said Ebony Guy, member of the Danville chapter of Virginia Organizing.

The meeting was about “more concise strategy” on building police-community relations. It appears that Virginia Organizing members and Danville police had a productive meeting, learning and understanding where the other stands.

“The hood issue did go viral, and a lot of that could’ve been avoided if” the police gave a more “direct answer” to why the hoods were going up, Guy continued.

“We are not anti-police. We are pro-community,” she said.

Broadfoot was very “receptive” of what Virginia Organizing had to say, Mayo said.

Correll Townes said the organization wants “our citizens to be aware” of what is going on in their city.

“We all want the same thing,” Mayo said of citizens and police: safe, healthy communities with a strong police-citizens relationship.